Erddig Hall stately home with extensive gardens in Denbighshire, on the outskirts of Wrexham. Today it is owned by the National Trust.

Erddig is just 2 miles south of Wrexham town centre. It was built in 1684–1687 for Joshua Edisbury, the High Sheriff of Denbighshire and designed in 1683 by Thomas Webb of Middlewich in Cheshire.[1]

Erddig is one of the country's finest stately homes. In 2003 it was voted by readers of the Radio Times and viewers of the Channel 5 television series "Britain's Finest Stately Homes" as "Britain's second finest".[2] In September 2007 it was voted the UK's "favourite Historic House" and the "8th most popular historic site" in the UK by Britain's Best.[3]

The house and family history 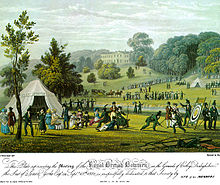 The 1822 meeting of the "Royal British Bowmen" archery club

The building was sold to the master of the Chancery, John Meller in 1714. John Meller refurbished and enlarged the house (including adding two wings in the 1720s), and, on his death in 1733 unmarried and childless, passed it to his nephew, Simon Yorke (d. 1767) (first cousin of Philip Yorke, 1st Earl of Hardwicke). The house was passed down through the Yorke family until March 1973, when it was given to the National Trust. This followed the collapse several years earlier of a shaft from the nearby coal mine (Bersham colliery) under the house, causing subsidence of 5 feet, which seriously affected the structural security of the house to the extent that, without suitable underpinning, it would have become a ruin. It was strengthened using the compensation of £120,000 the National Trust was able to extract from the National Coal Board. 63 acres of Erddig Park (out of view of the house) was subsequently sold for £995,000 and this paid for the restoration work on the house. The restoration was completed on 27 June 1977 when Charles, Prince of Wales officially opened Erddig to the public, joking that it was the first time in his, albeit short, life that he had opened something that was already 300 years old.

A tour of the mansion house

A tour of the house, which starts "below stairs", tells of the Yorke family's unusually high regard for their servants and, through a collection of portraits, photographs and verses (a family tradition started by Simon's son Philip Yorke (1743–1804), who published The Royal Tribes of Wales in 1799), provides a record of the people who lived and worked on the estate. In the staterooms "above stairs" there is a fine collection of 18th century furniture and other treasures (many of which originally belonged to John Meller, including a portrait in the Music Room of Judge Jeffreys, the "Hanging Judge"). The Yorke family seemingly never threw anything away and the house now has a unique collection ranging from the rare and magnificent (including some exquisite Chinese wallpaper in the State Bedroom) to the ordinary and everyday: indeed, one of the conditions that the last Squire, Philip S Yorke (1905–1978) imposed on handing over the house and estate to the National Trust in 1973 was that nothing was to be removed from the house. He is quoted as saying: "My only interest for many years has been that this unique establishment for which my family have foregone many luxuries and comforts over seven generations should now be dedicated to the enjoyment of all those who may come here and see a part of our national heritage preserved for all foreseeable time."

General John Yorke (1814–1890) was to become from 1861, the owner of the distinctive Plas Newydd in Llangollen, the self-styled home of the famous Ladies of Llangollen.

Erddig's walled garden is one of the most important surviving 18th century formal gardens in Britain. The gardens contain rare fruit trees, a canal, a pond, a Victorian era parterre, and are home to an a National Plant Collection of Hedera (ivy) by the National Council for the Conservation of Plants and Gardens. There is also a fine example of gates and railings made by ironsmiths the [[Davies brothers Davies brothers, of nearby Bersham, for Stansty Park; the gates were moved to Erddig in 1908. The arrangement of alcoves in the yew hedges in the formal gardens may be a form of bee bole.

'The Cup and Saucer' hydraulic ram at Erddig Hall

The nearby river supplied a source of water, and it was pumped uphill by a self running hydraulic ram, which utilised falling water to power itself, and pump the drinking water uphill to the house known as "Erddig's Cup & Saucer".

Whilst occupied by the Yorke family the house was never installed with mains electricity, with the last Squire, Philip, relying on a portable generator to power his single television set. The saw mill, however, was equipped with its own static steam engine to provide the power for sawing and turning.