Bersham is a small village in Denbighshire, forming a suburb of Wrexham, next to the River Clywedog. Wrexham owes a large amount of its original industrial heritage to Bersham, but despite this the village still retains a rural feeling.

The village holds special importance for economic historians, for not only did it house the workshops of the skilled Davies brothers, it was one of the cradles of the Industrial Revolution. This is the place where British iron making began in 1670, where smelting iron ore with coke began in 1721, and where John Wilkinson, the 'Iron Mad' pioneer of the Industrial Revolution, set up shop in 1761. For many years the area was one of the most important iron manufacturing centres in the world. The Bersham Ironworks Museum tells the story of the man who bored cannon for the American War of Independence and cylinders for James Watt's revolutionary steam engine that changed the face of the world.

Bersham Colliery, the last working coal mine in the Denbighshire Coalfield, was not actually in the village of Bersham but situated nearby in the village of Rhostyllen, it closed in 1986. The collapse of a shaft from the colliery in the 1970s seriously affected the structural security of the nearby Erddig House allowing compensation of £120,000 to be claimed by the National Trust against the National Coal Board.

Plas Power Woods comprise 83 acres of woodland running along the River Clywedog between Coedpoeth and Bersham, and stretches to the Nant Mill Wood situated upstream to the east on the Clywedog Trail. The vast majority of the woodland is ancient woodland although some parts were replanted with conifers and, locally, with beech and/or sycamore as late as the 1960s. The Woodland Trust is gradually restoring the native broadleaf woodland character of the plantation areas.

Bersham Church and the FitzHugh family 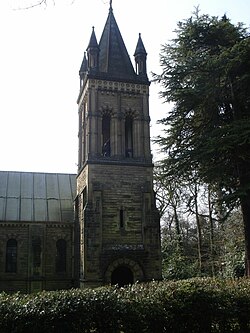 St Mary's in Plas Power is a 19th-century parish church in the heart of the village. The church was founded and built by Thomas Lloyd FitzHugh in 1875. His wife Emily Mary from Charlecote in Warwickshire took a great interest in the building and is the reason why the architect and organ builder were both from that county. It was originally built without a bell tower; however, one was added some years later. When Captain Godfrey FitzHugh was killed on active service in Palestine in 1917 his widow Ethel had the bells installed in his memory. They consist of a carillon of eight bells operated by hand and are still in use today.