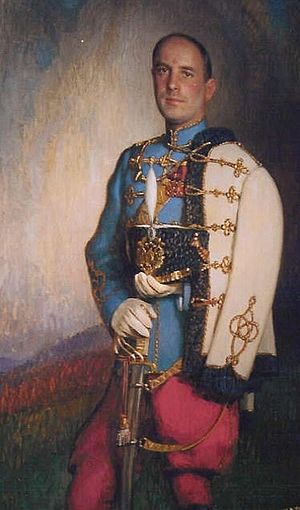 Erchless Castle is an L-plan castle in the parish of Kiltarlity and Convinth in Inverness-shire. The castle is located in the only part of the parish on the left bank the River Beauly, at the point where it forms from the confluence of the rivers Glass and Farrar. Built in the 13th century by the Bissetts, it came into the hands of the Chisholms in the 15th century, by the marriage of Alexander de Chisholme to Margaret, Lady of Erchless, and became their ancestral home. It was remodelled in the early 17th century as an L-plan tower house and underwent further alterations in the 19th century with the addition of a Baronial-style wing in 1895. It is protected as a Category B listed building.[1]

History in the 20th century

After the death of the last surviving member of the direct line of Chisholms the estate was owned by the trustees of the late Mrs Annie Cecilia Chisholm of Chisholm.[2] In 1932-33 the Estate Manager was recorded as William Macintyre, and he lived at the Sawmill Cottage.[3]

The Highland News, 17 April 1937, states that the Chisholm Estates had been sold on 10 April 1937 to an unknown buyer. The lands were said to have included Erchless Castle and Forest, with deer in the forests of Affric, Fasnakyle, Cozac, Benula together with the outlying estates of Buntait, Kerrow and Rheindown. The buyer was Highland Estates Ltd.[4]

During World War II the castle was said to have been requisitioned by the military for use as a rest centre for staff employed in entertaining the troops. In 1946 the Erchless Estate and castle were bought, for the reputed sum of £26,000, on behalf of Baron Siegfried Nikolai von Stackelberg and his wife Baroness Phyllis von Stackelberg. The funds came from the estate of her father George Roscoe, a member of the firm James Roscoe & Sons, the owner of Peel Hall Colliery, Little Hulton, and New Lester Colliery, Tyldesley, Lancashire, and the Valuation Roll for 1946-47 names the new owners as the Trustees of George Roscoe. The Baron, a former Russian Imperial cavalry officer, and his wife then ran the estate from Erchless Castle. They had been married in Kensington, London on 2 March 1936, when the Baron was living at Lingfield Court, Lingfield, Surrey, whilst Phyllis was living in Kensington, London. The Baroness' father, George, had married twice, and both of her brothers and her half brother had all died before the age of 25[5]

The Estate continued in the ownership of the Trustees of George Roscoe until 1963-64, but the Valuation Roll for the following year names the owner as L W Robson (Lawrence Robson, founder of accountancy firm Robson Rhodes).

However, the Trustees did not sell the whole of the former Erchless Estate: the Valuation Roll for Kilmorack for 1964-65 records them as still owning Teanassie House, and most of Breakachy. The Baron and Baroness then moved into Teanassie House to live in retirement. Their gravestone[6] reads: "In memory of Baron Nicholas Stackelberg of Teanassie House, much loved husband of Phyllis, died 30 September 1966. Phyllis Mary Roscoe died 21 March 1982."

In his will the Baron left the whole of his estate to Phyllis. In her will, she left Teanassie House and its contents to one of her god-daughters, the Countess Elizabeth Moussine Pouchkine, with the remainder of the estate going to various other godchildren. One of these was John Viscount Tarbat of Castle Leod, the current John Ruaridh Grant Mackenzie, 5th Earl of Cromartie.

During their time at the castle the household staff had included a butler, a Russian chef, a housekeeper and the personal maid to the Baroness. The Estate staff included a sawmiller, three cattlemen, a dairymaid and a stalker.

On the death of Lawrence Robson in 1982, the castle was inherited by his son, Erik Maurice William Robson.[7]