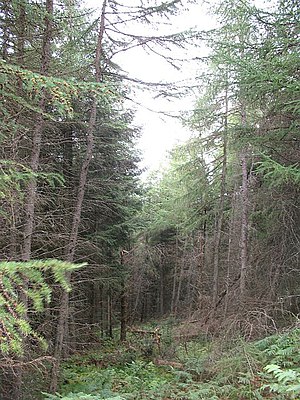 Beneath Plora Rig in the Traquair Forest

The Traquair Forest and the Elibank Forest are contiguous and generally treated as one unit by the name 'Elibank and Traquair Forest'. The forests are predominantly coniferous woodlands, overspreading the hills to the south of the River Tweed in the easternmost part of Peeblesshire and the north of Selkirkshire, south of Innerleithen (across the Tweed in Peeblesshire).

The county border is complicated here: most of the forest is in Peeblesshire, and includes the county's easternmost point, but a long finger of Selkirkshire intrudes in the midst, reaching almost as far north as the bank of the Tweed. The main body of Selkirkshire takes over east of Elibank Law (1,713 feet) and the Scrogbank Burn.

These woodlands appear on Ordnance Survey maps by the joint name 'Elibank and Traquair Forest'. The Forestry Commission, who own the forests, as frequently refer to the 'Innerleithen Forest' or 'Tweed Valley Forest Park, Innerleithen'. If the Elibank and Traquair Forests are to be sepataed, the boundary is along the Bold Burn, towards the east of the woodland, which runs down to the waiting Tweed at the foot of the slopes.[1] 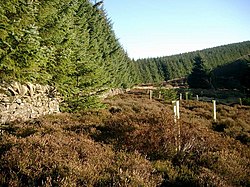 In the Traquair Forest

Together, the forest is the largest woodland in the Tweed Valley and includes some of the oldest surviving woodland to be found in the Forest Park. The highest point is Minch Moor (1,860 feet) in the west of the Traquair Forest.

The Traquair Forest was created as a royal hunting reserve in 1107, by a charter of King Alexander I, and the forests were accordingly maintained for the hunt and for riding. In the modern age much of it was planted by the Forestry Commission. 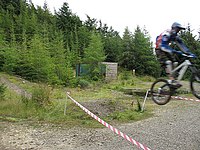 Mountain biking in the forest

To mountain bikers, the forest is known as '7stanes Innerleithen', and is known as one of the finest downhill mountain biking hotspots in the United Kingdom. It is considered a venue for more experienced bikers and is well renowned for its four downhill trails: 'Matador', 'Cresta Run', 'Gold Run' and 'Make or Brake'. There is a renowned, red-graded Innerleithen cross-country trail through the forest too.

To the north of the Tweed is the Glentress Forest, another 7stanes forest with a mountain biking centre at Glentress.

Two long-distance walking routes, the Southern Upland Way and the Cross Borders Drove Road, pass through the forest, climbing from Traquair village and up on to Minch Moor, the highest point in the forest, and on through the Traquair Forest, where they part ways.

There is a network of walking trails in the woods besides the two long-distance paths, and bridleways.

For all the leisure activities, the forest is nevertheless a working forest, with frequent felling and planting.