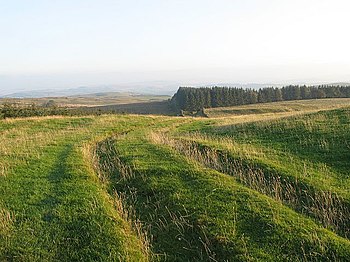 The Drove Road on Woo Law near Hawick

The Cross Borders Drove Road is a long-distance trail of 52 miles, steeped in history, running from Harperrig in Midlothian, over the hills, through Peeblesshire to Hawick in Roxburghshire.

The route is designed to be enjoyed on foot, by bicycle or on horseback, offering great variety in terms of scenery, surfacing, cultural and other interest.

In days gone by, before the train and the cattle truck, drovers drove their beasts between the trysts and the markets in Falkirk and Crieff and markets of the south, and their drove roads over the Pentland Hills became long established. The Cross Border Drove Road follows or imitates these routes, along winding tracks over the rolling hills and through the sheltered glens of the Tweed Valley

Once the route would have been busy and loud with the lowing of thousands of head of cattle and sheep. Now all is quiet. The Cross Borders Drove Road waymark discs bear a beast such as those driven this way for hundreds of years, between the 16th and 19th centuries.

Various sections of the original drove road still run between the parallel dykes, which once helped the drovers prevent their stock form straying. Elsewhere the route climbs over open hill, or follows tracks through the forests which have been planted long after the days of droving had ceased. The only sheep or cattle you are likely to meet today are those grazing on the hills or in the fields you will pass through.

The road is renowned as a pleasant route and has been used as a section of the journey from Land's End to John o' Groats. The section of Cross Borders Drove Road east from Traquair coincides with part of the Southern Upland Way, and a short section between Bowhill and Hawick coincides with the Borders Abbeys Way. Although never too far from civilisation, some days you can walk for miles without meeting anyone.

The route follows sections of ancient drove road between Harperrig, on the A70 (Lang Whang) southwest of Edinburgh, over the Cauldstane Slap – the pass over the Pentland Hills – through West Linton to Peebles and Traquair, and onward by way of the Yarrow Valley to Hawick.

The majority of the Cross Borders Drove Road (from the Cauldstane Slap to Yarrowford) is part of the 220-mile 'South of Scotland Countryside Trails' network, developed specifically for multi-use, and having benefitted from significant capital investment to address drainage issues, install new bridges, and to create new path links to avoid boggy sections of track or other problems. Both route and accompanying facilities have been designed to reflect the needs of horse-riders and walkers, including key considerations such as self-closing gates, appropriately spaced accommodation and parking to enable people to enjoy the route over several days, divided into lengths to suit different abilities and levels of fitness.

The Cross Borders Drove Road has now been recognised as one of Scotland's Great Trails - an elite group of long distance routes.