Eglwysilan is an ancient parish in Glamorgan, adjacent to the border with Monmouthshire. The name means "The Church of Ilan", a saint about whom relatively little is known. 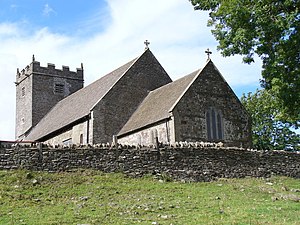 The Church at Eglwysilan 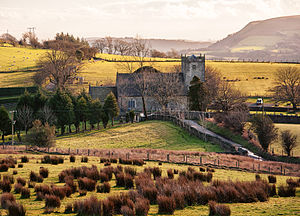 The church in its landscape

The parish church of Saint Ilan was built on the ridge between the Taff Valley and Aber Valley, on what was thought to have been the site of an earlier chapel or monastic cell. It may originally have been the home of a 6th-century monk.[1] The site lies on the ancient pilgrimage route from Llantarnam to Penrhys.[2]

In 1801, the parish had dependent chapels at Llanfabon and St Martin. The resident population was reckoned to number 1,885 people, 'residing in the hamlets of Eglwys Ilan, Ener Glynn, Glynn Tâff, Hendredenny, Parc, Rhyd y Byddin, and The Town of Caerphilly'.[3]

The churchyard contains the Grade-II* listed tomb of the bridge builder William Edwards [4] and many of the victims of the Senghenydd Colliery Disaster of 1913. Evan James, who wrote the lyrics of the Welsh National Anthem, was baptised at the church.[5]

The dedication of the parish is ambiguous. Rice Rees offers the opinion that Ilan may have been an early Celtic saint of whom no other trace survives.[6] The Cistercian Way website offers an unsourced tradition that Ilan may have been a pre-Norman bishop of Llandaff, and says that the 12th-century Book of Llandaff denotes the church at Eglwysilan as the resting place of the relics of Ilan.[7]

Rees is sceptical of an 18th-century reference in Ecton's Thesaurus,[8] which suggests that 'Ilan' is a corrupt form of Helen, mother of Constantine I;[6] nevertheless, the post-reformation Roman Catholic parish erected to cover the same territory in the 20th Century took the name of 'Saint Helen'.[9] Although Rees acknowledges that the 4th-century noblewoman Elen Luyddog may have become confused with the Empress Helena in historical records, he does not explicitly suggest Elen as a candidate for the patronage of Eglwysilan.

In a text from 1801,[3] the parish was said to be dedicated to 'Saint Elian'. There existed a fifth-century saint, Elian, active in north Wales and in Cornwall; Rees[6] acknowledges his presence in north Wales under the name Elian Geimiad, but again, does not propose this saint as a patron of Eglwysilan.