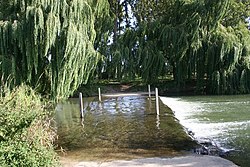 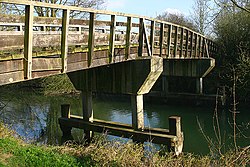 The Duxford Ford and Shifford Lock Cut Footbridge together cross the River Thames between Berkshire on the south bank and Oxfordshire on the north bank, carrying a footpath between Duxford, Berkshire and Chimney, Oxfordshire.

The ford, from which Duxford receives its name, is in the middle of a U-shaped meander of the Thames swinging southward and the original crossing was the ford alone. This shallow ford rendered the rive unnavigable past this point. Therefore in 1898 the Shifford Lock was built at the downstream end of the meander and a half-mile cut, the Shifford Lock Cut, was dug across the top of the loop in the river to bypass the ford at Duxford. A wooden footbridge, the Shifford Lock Cut Footbridge, crosses the cut to complete the footpath.