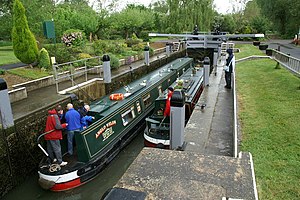 Shifford Lock is a lock on the River Thames in Oxfordshire. It is in the centre of a triangle formed by the small villages of Shifford, Duxford (Berkshire) and Chimney. It is at the start of a navigation cut called the Shifford Lock Cut built with the lock by the Thames Conservancy in 1898. It replaced a flash lock in a weir about three-quarters of a mile downstream.

There is a small weir beside the lock and a larger weir on the old course of the river upstream at the top of the lock cut.

The original flash lock was in a weir close to the entrance to Great Brook. This was removed between 1829 and 1853, and there were later complaints about the lack of draught in the river. Discussion of the possibility of the new lock only began in 1896 and two years later it was open. The lock cut was based on a pre-existing side channel which was considerably widened. There were moves to have it called Chimney Lock, but the name Shifford Lock was adopted.[1]

The lock can be reached on foot from Chimney about a mile away.

The Cut and the reach above the lock

The Shifford Lock Cut is about a mile long, and halfway along is the Shifford Lock Cut Footbridge. The cut rejoins the old course of the river and continues past Chimney. Further along the reach there is another wooden footbridge, Tenfoot Bridge and after that is Tadpole Bridge.

The Thames Path starts on the south bank of the cut, crosses over on Shifford Cut Footbridge and then continues on the north bank beyond the cut to Rushey Lock.