From Wikishire
(Redirected from Dundee Combination)
Jump to: navigation, search

Dundee is a city and the largest town of Angus, standing on the north bank of the Firth of Tay. It is the fourth-largest city in Scotland.

Evidence suggests Dundee has been continuously occupied since the middle stone age. The town developed into a burgh in Mediæval times, and expanded rapidly in the 19th century largely due to the jute industry. This, along with its other major industries gave Dundee its epithet as the city of "jam, jute and journalism".

Today, Dundee is promoted as the City of Discovery, in honour of Dundee's history of scientific activities and of the RRS Discovery, Robert Falcon Scott's Antarctic exploration vessel, which was built in Dundee and is now berthed in the city harbour. Biomedical and technological industries have arrived since the 1980s, and the city now accounts for 10% of the United Kingdom's digital-entertainment industry. Dundee has two universities—the University of Dundee and the University of Abertay Dundee.

Dundee is located on the north bank of the Firth of Tay and near the North Sea. The city surrounds the basalt plug of an extinct volcano, called Dundee Law or simply The Law (571 feet).[1] Dundee is south-facing on the hillside, leaving it on average a couple of degrees higher than Aberdeen to the north or than the coastal areas of Angus, and so that it suffers less severe winters than other parts of Scotland due to the close proximity to the North Sea; the salt air and a range of protective hills at the back of the city, which are often snow covered while the city itself remains clear.

The city, being on a relatively small landspace, is densely populated, characterised by tall Victorian tenements, mainly four storeys high, and built from a honey or brown sandstone. The inner districts of the city, as well as some of the outer estates, are home to a number of multi storey tower blocks from the 1960s, although these have been gradually being demolished in recent years. To the east of the city area stands the distinct but incorporated suburb of Broughty Ferry.

The name "Dundee" is made up of two parts: the Celtic place-name element dùn, meaning fort; and a second, enigmatic element, which may derive from the gaelic "dèagh", meaning 'fire' or from "Tay".[2]

The area surrounding the modern city has been continuously occupied since the Middle Stone Age.[3] From the Iron Age, through to the early Mediæval period, the area formed a demesne controlled from the Law Hill fort.[4]

The earldom of Dundee was granted by charter by King William to his younger brother, David (later Earl of Huntingdon) in the late 12th century.[5] The situation of the town and David's promotion of it as a trading centre, lead to a period of prosperity and growth.[4][6] The earldom was passed down to David's descendants amongst whom was John King of Scots, the town becoming a royal burgh on the coronation of John as king in 1292.[4] Burghal status was revoked during the First War of Independence and subsequently renewed by charter from Robert the Bruce in 1327.[6]

The town suffered large scale destruction during the "rough wooing" of 1544 to 1551.

In 1645, during the Wars of the Three Kingdoms, Dundee was again besieged, this time by the Royalist Marquess of Montrose.[7] The town was finally destroyed by Parliamentarian forces, led by George Monk in 1651.[6] The town became an early site of support for the Jacobite cause under the influence of John Graham of Claverhouse, 1st Viscount Dundee, who raised the Stuart standard on Dundee Law in 1689, whence his nickname Bonnie Dundee.[8]

Dundee greatly expanded in size during the Industrial Revolution from the burgeoning British Empire trade, flax and then latterly the jute industry.[9] By the end of the 19th century, a majority of the city's workers were employed in its many jute mills and in related industries. Dundee's location on a major estuary allowed for the easy importation of jute from India and whale oil—needed for the processing of the jute—from the city's large whaling industry.

The jute industry began to decline in the 20th century as it became cheaper to process the cloth on the Indian subcontinent. The city's last jute mill closed in the 1970s. 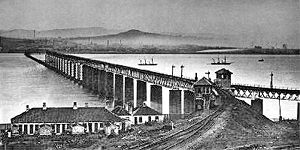 The original Tay Bridge (from the south) the day after the disaster. The collapsed section can be seen near the northern end

Dundee is also became known for smaller industries, notably the production of marmalade,[10] and the publishing firm DC Thomson & Co., which was founded in the city in 1905 and remains the largest employer after the health and leisure industries.[11][12]

Dundee was thus said to be built on the 'three Js': Jute, Jam and Journalism.

Dundee's maritime and shipbuilding industry was once a major economic force. At its height, 200 ships per year were built in there, including Robert Falcon Scott's Antarctic research vessel, the RRS Discovery. This ship is now on display at Discovery Point in the city.[13] A significant whaling industry was also based in Dundee, largely existing to supply the jute mills with whale oil. Whaling ceased in 1912 and shipbuilding ceased in 1981.[14]

The town was also the location of one of the worst rail disasters in British history, the Tay Bridge disaster. The first Tay Rail Bridge, was opened in 1879. It collapsed less than a year later during a storm, as a passenger train passed over it, resulting in the loss of 75 lives[15]

The city's economy was transformed after the Second World War. While jute still employed one-fifth of the working population, new industries were attracted and encouraged. In late 1945, the NCR Corporation selected Dundee as the base of operations primarily because of the lack of war damage, good transport links and high productivity from long hours of sunshine, and by the 1960s, NCR had become the city's principal employer, producing cash registers, and later Automatic Teller Machines, at several of its Dundee plants. The development in Dundee of a Michelin tyre-production facility helped to absorb the unemployment caused by the decline of the jute industry, particularly with the abolition of the jute control by the Board of Trade on 30 April 1969.[16]

Employment in Dundee changed dramatically during the 1980s with the loss of nearly 10,000 manufacturing jobs due to closure of the shipyards, cessation of carpet manufacturing and the disappearance of the jute trade. To combat growing unemployment and declining economic conditions, Dundee was declared an Enterprise Zone in January 1984. In 1983, the first Sinclair ZX Spectrum home computers were produced in Dundee. In January 2007, NCR announced its intention to cut 650 jobs at its Gourdie facility, and to turn the facility over for low volume production. However, following the global economic downturn of 2007-2009, the company closed the manufacturing facility completely in June 2009, with the loss of the remaining 120 jobs. The company has however pledged to retain R&D, sales and support functions in Dundee. 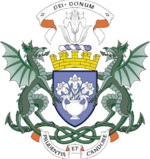 City of Dundee Arms since 1996 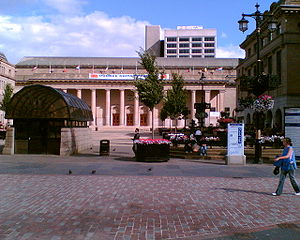 The civic head and chairman of the Dundee City council is the Lord Provost. Council meetings take place in the City Chambers, which opened in 1933 and are located in City Square, while the council executive is based in Tayside House, though plans are afoot to demolish Tayside House in favour of new premises on North Lindsay Street.[17].

Cox's Stack, a chimney from the former Camperdown works jute mill. The chimney takes its name from jute baron James Cox who later became Lord Provost of the city

Dundee is a regional employment and education centre, with over 300,000 persons within 30 minutes drive of the city centre and 700,000 people within one hour. Many people from elsewhere in Angus, from Fife, and from Perthshire commute to the city.[18]

Gardyne's Land, located at 71 High Street, is a collection of five unique and interesting historical buildings. The Merchant's House (part of the complex) is the oldest, built by John Gardyne around 1560. The house is recognised as Dundee's oldest house. All of the houses have been restored and converted into a backpackers hostel.[19] 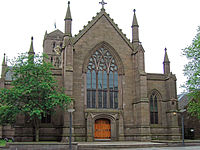 Dundee has two professional football teams; Dundee and Dundee United who play at Dens Park and Tannadice Park, respectively.[20][21] Their stadiums are closer together than any senior football club pair in the UK.[22]

The city is home to the Dundee Stars ice-hockey team, who play at Dundee Ice Arena.