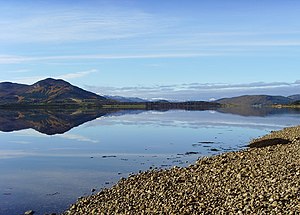 The Dornoch Firth from Meikel Ferry

Shoreline across the Firth

The Dornoch Firth is a firth on the North Sea coast, 9 miles long and forming part of the boundary between Ross-shire to the south, and Sutherland to the north. The head of the firth is reckoned to be at Bonar Bridge, above which the waterway does not end but continues for 12 miles further inland as the Kyle of Sutherland, the tidal estuary of the River Oykel.

The firth cuts deeply into the coast, its mouth between Dornoch to the north and the marshes of Morrich More on the south. No jaw-like aperture marks the mouth of the firth as others have, but the "tooth" of Dornoch Point and the tidal sands leave a suddenly narrow navigable channel. The A9, the main east coast road, has since 1991 crossed the firth on the Dornoch Firth Bridge, which is convenient but t take it is to miss the beautiful scenery along the shores of the firth, which is next bridged at the head of the Dornoch Firth, at Bonar Bridge. 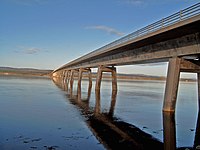 In 1991, the firth was bridged, the new Dornoch Firth Bridge providing a shorter route on the A9 road between Inverness and Thurso; until then traffic had enjoy the journey up to Bonar Bridge at the head of the inlet. 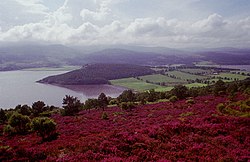 Dun Creich on the north shore

Together with Loch Fleet, the Dornoch Firth is a designated as a Special Protection Area (SPA) for wildlife conservation purposes. Additionally, together with Morrich More, it has the designation of Special Area of Conservation.

The total SPA hosts significant populations of the following birds:

On 16 August 1809 an over-laden ferryboat sank on the Dornoch Firth with the loss of 99 lives, an incident known as the Meikle Ferry disaster.