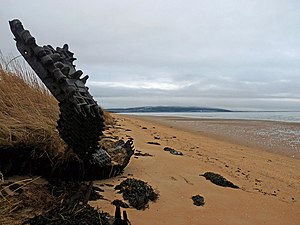 Morrich More is an extensive area of dune grassland and wetland on the southern shore of the Dornoch Firth, in Ross-shire, forming a broad-headed peninsula with the firth on its north-west and north-east sides and Inver Bay, a tidal creek, to the south-east. Beyond lies Tarbat Ness and then the open North Sea.

The whole wetland is also a military area, a bombing range known as ‘RAF Tain’, and so inaccessible.

The shores of the area are edged with broad tidal sands known as Whiteness Sands. 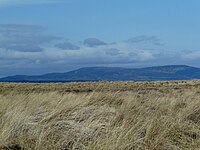 Morrich More lies east of Tain, on the southern shore of the Dornoch Firth, which separates Ross-shire from Sutherland to the north. Offshore lie extensive areas of sandflat, including the tidal island of Innis Mhòr, a sandbank seaward of the marsh, and a sand spit known as Paterson Island, which provide shelter.[1]

The area includes the most extensive area, about a square mile, of salt marsh.[2]

Morrich More is a Site of Special Scientific Interest and forms part a Special Area of Conservation with Dornoch Firth.

Morrich More falls within the Dornoch Firth and Loch Fleet Special Protection Area, one of the best examples of a large complex estuary in the British Isles, relatively unaffected by industrial development.[3] Extensive sand-flats and mud-flats are backed by salt marsh and sand dunes with transitions to dune heath and Alder (Alnus glutinosa) woodland. The tidal flats support internationally important numbers of waterfowl on migration and in winter, and are the most northerly and substantial extent of intertidal habitat for wintering waterfowl in Europe.

The area is described as:

one of the most outstanding coastal sites in Britain, especially noteworthy for the development of an extensive low-level sandy plain on which a set of parabolic dunes are superimposed.