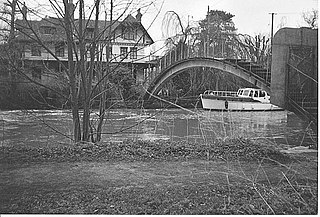 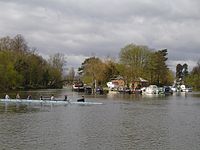 D'Oyly Carte Island is a small private island in the River Thames, belonging to Surrey but in the midst of the stream which divides that county from Middlesex.

Before 1890 the island was known as Folly Eyot, but was renamed in the 1890s by its new owner, the theatre impresario Richard D'Oyly Carte.

The island is wooded, 160 yards in length and, apart from its two points, 33-50 yards in width. It lies close by other inhabited Thames islands (or 'eyots'), close to Weybridge, all on the reach above Sunbury Lock, 200 yards downstream of Shepperton Lock.

D'Oyly Carte Island is joined to the Surrey bank by a bridge, and part of the Parish of Weybridge.

The island was, until the eponymous owner bought it, called Folly Eyot. Richard D'Oyly Carte was the producer of the Gilbert and Sullivan comic operas from 1875 to 1896, founder of the Savoy Theatre and Royal English Opera House (now the Palace Theatre) in London and a hotelier. He bought the island around 1890, and it acquired his middle name and surname.[1]

Carte intended to use as a special secluded annex, accessible by boat, to his new Savoy Hotel, but a panel of the local magistrates refused to grant him a licence to sell alcoholic drinks on the island.[1] Among the famous guests who stayed at Carte's house on the island were the dramatist W S Gilbert and the composer Arthur Sullivan.[2] Carte's widow, Helen Carte, sold it to a new private owner.

Carte built the main structure of the island, Eyot House, which has a large garden that he and his wife helped to design surrounded by trees, that he used as a residence.[3][4]

A small single span footbridge was built in 1964 to provide access to the house with brutalist railings and gates. This is a very high arch of a single steel box girder with treads.[5] The island has a marina that provides mooring to small boats.[6]