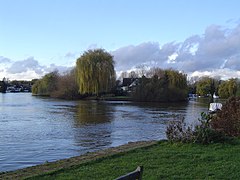 Pharaoh's Island or Dog Ait is an island in the River Thames, belonging to Middlesex. It is situated 300 yds upstream of Shepperton Lock.

The island has a length of 300 yds and a maximum width of 65 yds. Shepperton Lock is 300 yds downstream and two other channels leading to weirs diverge off after the island to its south-east. These channels then surround Lock Island and Hamhaugh Island.[1] The island is only accessible by boat, with the facilities of Lock Island downstream and moorings there or by the pub The Thames Court almost opposite its eastern tip on the nearer, Middlesex bank.

Above the lock, the variation in river level has been between three inches at the lock gate and 39 inches This compares favourably to variation below the lock at between 8 ft 9 in and 16 ft 3 in in depth.[2]

It was given to Admiral Nelson after the Battle of the Nile (1798). He used it as a fishing retreat.

Since the late 20th century it has hosted 14 homes with individual moorings.[3] Most of the properties have Egyptian names.[4]

The property names are:[5]

As the home of his family, the island was the setting for director John Boorman's two semi-autobiographical films: Hope and Glory in 1987 and Queen and Country in 2014.[6]