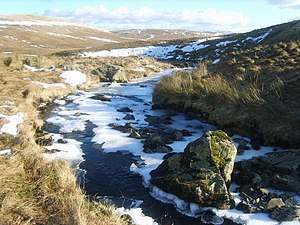 The Crookdale Horseshoe is a group of hills or a walk round them, on the eastern edge of the Lake District, in Westmorland described in a chapter of Alfred Wainwright's book The Outlying Fells of Lakeland.[1]

The hills are to the west of the A6 road. Wainwright describes an anticlockwise walk starting along the valley of Crookdale Beck (which joins Borrow Beck before flowing into the River Lune) to reach Lord's Seat, also known as High House Fell, at 1,719 feet, and returning over Robin Hood at 1,613 feet and High House Bank at 1,627 feet.

The ridge forming the northern part of the "horseshoe" is described in Wainwright's Wasdale Horseshoe chapter.