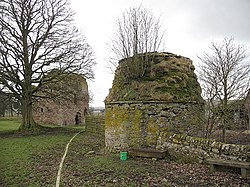 It is bounded by Carmichael to the west; by Pettinain to the north; by Libberton to the east; and by Symington to the south. At the extreme south of the parish is a quad-point with the parishes of Carmichael, Covington, Symington and Wiston & Roberton at the summit of Tinto.

The name "Covington" was first recorded in the late 12th century in the Latin form Villa Colbani, "Colban's or Cowan's village", and 20 years later as Colbaynistun.[1]