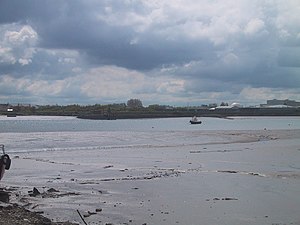 Dundalk Bay is a large, exposed estuary of 13 square miles on the east coast of Ireland, indenting the coast of County Louth.

The inner bay is shallow, sandy and with extensive tidal sands, though it slopes into a deeper area a mile from the transitional water boundary.[1]

The bay is predominantly influenced by the sea, though several rivers drain into the bay from the west. In the northwest corner of the bay, the Castletown River cuts through the foreshore and the smaller River Fane flows into the southeast corner. While the bay is largely made up of intertidal flats, there is a significant area of salt marsh on the western shore.[1] The catchment around the bay is of mixed agriculture and urban land use. The Castletown River is routinely dredged for navigation purposes for the deep water port of Dundalk.

Rivers which flow into Dundalk Bay include:[2]