Colsterworth is a village and parish in the Kesteven part of Lincolnshire, within the Soke of Grantham. It lies less than half a mile west of the A1 road, about seven miles south of Grantham, and 12 miles north-west of Stamford. The village, with the hamlet of Woolsthorpe-by-Colsterworth, had a population of 1,713 at the time of the 2011 Census in an area of 3,620 acres.[1]

The civil parish includes the village of Woolsthorpe-by-Colsterworth, ⅔ mile north-west of Colsterworth. The parish shares a grouped parish council with Gunby and Stainby and North Witham, known as Colsterworth and District Parish Council.[2]

The name Colsterworth is from the Old English 'colestre' + 'worth' for "enclosure of the charcoal burners"; the name appears as "Colsteuorde" in the Domesday Book.

The village dates from the Roman era. It is close to Ermine Street, the old Roman road that ran from London directly north to Lincoln and to the Roman road known as High Dyke. A Roman smelting furnace was found at Colsterworth in 1931, as was a small defended Late Iron Age settlement in the 1940s.[4]

Colsterworth is raised upon a slight limestone ridge, with the River Witham running below on the western side and bisecting the two villages. The old hamlet of Twyford (in the parish, but in Beltisloe wapentake) has been incorporated by the growth of Colsterworth, but the name survives in the names of some houses and in Twyford Wood. The area between Colsterworth Church and Twyford was once known as Dunkirk. Colsterworth, Woolsthorpe and Twyford are all separately entered in the Domesday Book of 1086.[5]

The enclosures of the land in 1808 allowed the local landlords to increase their holdings. Thirty villagers also received land, but some sold on to avoid the compulsory expense of fencing it. Colsterworth...The rector commuted his tythes for 398 acres, in addition to his 11 acres of glebe. The position of Colsterworth on the Great York Road, later the Great North Road, became important as soon as the turnpike road was completed in 1752. It was appointed a post town, and by the mid-19th century had a thriving coaching trade. There were numerous inns - ten at one time. However, the village was bypassed in 1935.[6] The old coaching inns have been transformed into houses or business properties, such as The George House and The Sun Pottery, or demolished completely. The White Lion public house, standing opposite the parish church of St John the Baptist, alone now serves the population. About that time, ironstone workings began. These were closed in the 1970s and the site rehabilitated.[7] Colsterworth also lies one mile to the west of Twyford Wood, which was the site of a Second World War airfield RAF North Witham, and still retains military artefacts, including open runways and a derelict control tower. After the war, the grassed part of the airfield was planted with oaks and conifers. The grassland habitat is home to a regionally important colony of dingy and grizzled skipper butterflies.[8]

In 1884 the Rev. J. Mirehouse, rector of Colsterworth, was responsible for the Home Office Baby publicity stunt.[9]

The former Lincoln City footballer Ayden Duffy was brought up in Colsterworth.[10]

A drawing of St John the Baptist's church, by the antiquarian William Stukeley, 1722 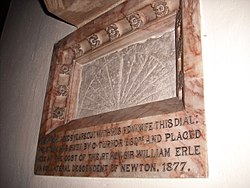 Memorial plaque with sundial plate, cut with a penknife by Sir Isaac Newton in 1651, in St John the Baptist's church

The parish church of St John the Baptist has been a Grade-I listed building since 1966.[11] Its origins go back to Saxon times, as indicated by the herring-bone stonework in the chancel. The Norman arches were preserved during Victorian renovation, of which this church is a prime example. The surrounding churchyard has been closed for almost a century but is kept in order by the Parish Council. Inside the church, behind the organ, is a stone sundial plate that was cut with a penknife by Sir Isaac Newton when nine years of age. The stone, which has no gnomon, is mounted upside down below a carved wooden effigy of the scientist.[4] Newton's mother, Hannah Ayscough (died 1679) and father, also called Isaac (died 1642), were buried in the church.[3]

St John the Baptist's belongs to the Colsterworth Group of Anglican churches, sharing a priest with Holy Cross at Great Ponton, St Guthlac's at Little Ponton with Woodnook, St James' at Skillington and St Andrew and St Mary's at Stoke Rochford with Easton. It is in the deanery of Beltisloe and the Diocese of Lincoln.

Methodism came to Colsterworth about 1795. The present Methodist church in Back Lane dates back to the 1830s[7] and is part of the Grantham and Vale of Belvoir Methodist Circuit.[12]

There is little employment in the village itself. During, and for some time after, the Second World War work was available at the ironstone excavations,[13] but after operations ceased the site was filled and levelled. A tyre depot and Christian Salvesen food cold-store offer local employment. Farming, the traditional occupation that previously absorbed most of the available workforce, still provides some employment, for instance at the Openfield grain cooperative on the former RAF station. There is work at fast-food restaurants Little Chef, OK Diner and Travelodge on the A1, and at the nearby Stoke Rochford Hall, a conference and function centre.[14]

The village has a post office, surgery, Co-op store and hairdresser, with greengrocer, butcher and fishmonger mobile shops. There is a mobile library service.[15]

Other facilities in the village include a sports and social club, a village hall, a youth centre that doubles as a nursery, and three playgrounds. There is another village hall at North Witham.[16]

Colsterworth's Church of England primary school also provides for children in neighbouring villages. It has about 100 pupils in five classes that span the seven years of primary education.[17] The school is a "guardian school" for nearby Woolsthorpe Manor,[18] the birthplace of Sir Isaac Newton.[19] The new school buildings that opened in Back Lane in 1973 replaced earlier ones in School Lane, dating from 1824 and 1895.[7]

The A1 trunk road at Colsterworth was redeveloped in 2010 with the removal of Colsterworth roundabout and an added road bridge over the A1 for local traffic, this to address safety and traffic congestion concerns.[20] The village is on the bus route between Grantham and Witham.[21]

Although the oldest dwellings are of limestone, 1920s and 1930s brick homes are interposed amongst them. During the 1970s a large estate, Woodlands Drive, was built on ground previously belonging to Colsterworth House,[22] which was demolished. The land between the village and the A1 was developed into a new housing estate. More recently, in 2009, a further housing development commenced on land previously utilised for steel storage and distribution, known as Newton Grange.[23]

A village archive group was founded to record memories of Colsterworth people for posterity. The group's aim is to chronicle local social history and changes in dialect, and publish material as a resource and educational tool in book and DVD form. It has been funded by Lincolnshire Community Champions and the Local Heritage Initiative, now under the auspices of the Heritage Lottery Funding.[5]