Clowne is a village and civil parish in Derbyshire, lying nine miles north-east of Chesterfield and seven miles south-west of Worksop. It is mentioned in the Domesday Book as Clune. The name is derived from the Celtic Clun for a river.[1]

Clowne, originally Clune, has been spelt in various ways over the last 1,000 years including, Cloune, Clone, Clowen, and most recently Clown. It was mentioned in the Domesday Book of 1086.[2] Both of the railway stations in the village spelt their names differently at different times; they both started as "Clown", one was renamed twice, firstly as "Clown and Barlborough" (no "e") then as Clowne and Barlborough, the other was renamed Clowne South.[3] It has frequently been noted on lists of unusual place names.[4]

Between Clowne and Creswell, on the southern end of the band of magnesian limestone which runs south from Durham to the Derbyshire-Nottinghamshire border, are Hollinhill and Markland Grips, a series of valleys often with vertical cliff-like sides formed by meltwater action of receding glaciers at the end of the last Ice age. 'Grips' is the local term for this feature. In the cliff sides are several small caves, rock shelters and fissures where human bones, which have been carbon dated to the early Neolithic period, have been discovered.[5] During the Roman period, a fort guarding an important ridgeway which ran north to south was close to Clowne. It was close to an even older Bronze Age fortification on a promontory north of Hollinhill Grips.[6][7] The Grips are a Site of Special Scientific Interest, managed by the Derbyshire Wildlife Trust.[8] 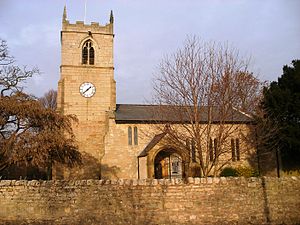 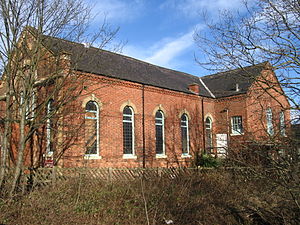 The first recorded mention of Clowne manor was in 1002 when the owner was Wulfric Spot. The Domesday Book refers to Ernui but then there was no mention of the manor until 1485 when Clowne was associated with the Bolsover manor.[9] The manor eventually passed to the Cavendish family and through marriage to the Bentinck family, the Dukes of Portland.[10]

The church, dedicated to St John the Baptist, was built during the 12th century. The medieval cross[11] and the church of St. John the Baptist[12] are the oldest surviving structures in the village.[1]

In the 17th century Clowne was a rural farming community. Some buildings still stand from this date, notably the Anchor Inn and Sheridon's Yard (now private residences). The plague struck Clowne in 1586 and 1606, and victims were buried away from the village at Monument Field or Plague Field.[13]

At the beginning of the 19th century the inhabitants of Clowne worked in agriculture, or mined the shallow coal seams. Others were employed at the mill, which made candle-wick, sacking and sail-cloth.[1] During the Industrial Revolution, Clowne grew exponentially, swallowing the tiny neighbouring villages of Hickinwood and Markland and becoming a colliery village. The sinking of the 1,000-foot-deep mine, Southgate Colliery, in 1877 brought in workers from elsewhere. At its peak it employed 400 men and produced 600 tons of coal per day.[7] At the end of the 19th century, rows of Victorian terraced houses were built to house the mining families. This growth left its mark on the village visible in the old school (built 1895), the terraced housing and the old village High Street (1901) as well as the Lancashire, Derbyshire and East Coast Railway, which became the Great Central, and the Midland Railway lines which ran through the village each having a railway station. The colliery survived a fire in 1920 but closed in 1929 after the pit flooded.[14]

Clowne is largely a residential village in the north east corner of Derbyshire between Chesterfield and Worksop. It is situated on the old Mansfield to Rotherham high road, now the A618, at its junction with the|A616 road from Newark-on-Trent to the M1 motorway at nearby Barlborough. The village is surrounded by rolling farmland, mostly arable.[15] The area of Clowne is 1,825 acres of limestone and clay land watered by numerous springs. Harlesthorpe Dam covers about 4.0 acres (1.6 ha) and there is a chalybeate spring called Shuttlewood Spa in the neighbourhood.[16] Land to the north west of Clowne is a Green belt.

Since the closure of the railway stations, Clowne has been dependent on road transport. Buses run by Stagecoach Chesterfield and Stagecoach Worksop operate services in and around Clowne.[17][18]

The church of St. John the Baptist is situated on an ancient ridgeway and dates from Norman times, the south doorway and chancel arch are of Norman architecture. It was partially rebuilt in the Early English and Perpendicular styles.[12] The Norman chancel was rebuilt and enlarged in 1955 when two chapels were added, one dedicated to those who lost their lives in the coal mines.[1]

The Salvation Army meet in Clowne.[20]

Roman Catholics in the area used Southgate House Chapel to celebrate mass. The chapel was built in 1901 by Lady Petre, the second wife of Colonel Butler Bowden. The chapel continued in use until 1950 and is now the dining room of the Van Dyk Hotel.[21] Roman Catholics now worship at the Church of Sacred Heart in Clowne.[22]