Clothworkers' Hall is the livery hall of the Worshipful Company of Clothworkers, one of the privileged livery companies of the City of London. It stands within Dunster Court, a precinct between Mincing Lane and Mark Lane, in the City.

Though modern in date, having been built in 1958 after its predecessor was destroyed in the Blitz, the hall follows a beautifully proportioned neo-Classical style externally.

The site of Clothworkers' Hall on Mincing Lane was conveyed to a group of Shearmen in 1456, who built that Company's hall here.

By the reign of King James I, the company was very wealthy and influential: in 1606 the King became a Clothworker, and in 1609 the Company invested in both the plantation of Ulster (and with it the foundation of the City of Londonderry) and in the plantation of Virginia.

In 1633, the third Clothworkers' Hall was built. This stood for just 33 years, until in 1666 it was destroyed in the Great Fire of London. A new hall, the fourth, was built after the fire. 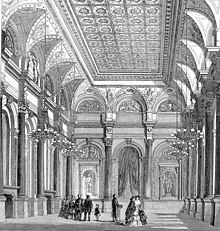 The original craft of the Clothworkers was the finishing of woven woollen cloth: fulling it to mat the fibres and remove the grease, drying it on tenter frames, raising the nap with teasels and shearing it to a uniform finish. The Ordinances of The Clothworkers' Company, first issued in 1532 and signed by Sir Thomas More, sought to regulate clothworking, to maintain standards and to protect approved practices.

From the later Middle Ages, cloth production gradually moved away from London, and at the Industrial Revolution of the 18th and 19th centuries very little was left as the great mills of Lancashire, Lanarkshire, Yorkshire and the Midlands churned out mile upon mile of cloth of wool and cotton.

Today the Company's main role is in the charitable sphere, through the Clothworkers' Foundation, an independent charity. Through its grants, the Foundation seeks to improve the quality of life, particularly for people and communities that face disadvantage.