Carpenters' Hall is the livery hall of the Worshipful Company of Carpenters, one of the privileged livery companies of the City of London. It stands on Throgmorton Avenue and London Wall in the City. While the company is ancient, their livery hall is not; it was built in 1960 to replace an earlier hall destroyed by German bombs during the Blitz.

As with other livery halls of the City, Carpenters’ Hall has been used since the Middle Ages for meetings of the Guild and by other organisations to meet and entertain, including other guilds.

The Carpenters’ Company has been based on London Wall since its first Hall was built there in 1429. Since that time, there have been three Halls: 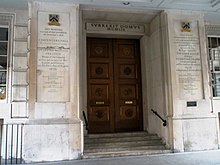 The Entrance to Carpenters' Hall
Retrieved from "https://wikishire.co.uk/w/index.php?title=Carpenters%27_Hall&oldid=62358"
Categories: