There is a fine gothic church, dedicated to St Andrew,[3] which is listed Grade I. The village pub, The Green Man, is also a historic building.

The first part of the name is Old English clif tun, that is cliff farm; the de Camvill family held the land in the early 13th century.[4] The name has also been recorded as Clistone.[5]

There is some evidence of pre-Saxon, or even pre-historic settlement in the area. The settlement of Clistone is mentioned in Domesday Book as having 33 villagers, a priest, 11 ploughs and 2 mills. One of the mills was possibly at Mill Farm.[5]

After the Norman Conquest the manor belonged to the king. From 1200 it was owned by the Camville (or de Camvill) family, at least until 1315. By 1700 it was in possession of the Coventry family, who sold it in that year to Sir Charles Pye, Bart. His family still owned the manor in 1851, in the person of Henry John Pye.[6][7]

Clifton contains a number of listed buildings, including the Grade I listed Church of St Andrew, Clifton Hall, Manor Farm, the old Post Office and the village pub, the Green Man. There are also several historic buildings in Haunton.[8] 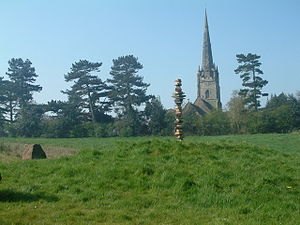 Church and monument at Clifton Campville

The parish church, dedicated to St Andrew, is a Grade I listed building.[8] Though nothing remains of the building mentioned in Domesday, some parts of the south wall date back to the year 1200, with traces of 13th century wall paintings. The church was enlarged into the shape of a cross in the first half of the 13th century. It was enlarged again in the 14th century. The tower was built in the first half of the 14th century, with a spire, reaching to a height of about 210 feet, added at some time during the century. The interior includes 14th century screens carved from oak; the rood screen is from the 15th century, as is some stained glass in one of the north windows. The church was restored by George Edmund Street in the second half of the 19th century, and again by W. D. Caroe in the early 20th century. In 1984 the spire was struck by lightning, with much damage to the church. Repairs were completed in 1987.[5][9]

The adjoining cemetery also dates back to mediæval days.[5]

The Old Rectory is in origin a 15th-century building, though the history of the rectory can be traced further back, to the mid 14th century. The building was altered in 1694, and again in 1778, and restored in around 1980. It is listed Grade II.[5][8]