Chippenham is a market town in Wiltshire, found 13 miles east of Bath. In the 2001 census the population of the town was recorded as 28,065.

The town was established on a crossing of the River Avon and is believed to have existed as some form of settlement since before Roman times. It was a royal vill, and probably a royal hunting lodge,[1] under Alfred the Great. Kings lodge school, a primary school in Chippenham was named after King Alfred's Hunting lodge. The town continued to grow when the Great Western Railway arrived in 1841, and while historically a market town the economy has changed to that of a commuter town.

The Anglo-Saxon Chronicle records the town as Cippanhamm, which would be pronounced much as the town's name is pronounced today. The name may refer to a founding landowner ("Cippa's meadow") or it may be derived from the Old English word Ceap, meaning market.[2][3]

Two villages share the name: Chippenham, Cambridgeshire and Chippenham, Monmouthshire. There is also a Cippenham in Buckinghamshire.

Chippenham is set on a prominent crossing of the River Avon and lies between the Marlborough Downs to the east, the Cotswolds to the north and west and Salisbury Plain to the south.

The town is surrounded by sparse countryside and there are several woodlands in or in close proximity to the town, for example, Bird's Marsh, Vincients Wood and Briars Wood.

Chippenham railway station is on the main line rail route and an important junction between London Paddington to the West Country and is famous for its railway arches and other buildings engineered by Isambard Kingdom Brunel as part of the Great Western Railway development. It is served by main line services and a smaller service towards Southampton. 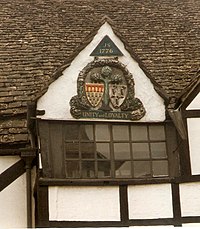 The original Buttercross, a stone structure, was erected in c. 1570 and stood in the current location of Barclays Bank, where it served as the centre of the Shambles. The Buttercross was used for the sale of meat and dairy produce.

In 1889 Mr E C Lowndes bought the Buttercross for £6. He re-erected it as a gazebo in the kitchen garden of the Castle Combe Manor House, where it subsequently fell into disrepair. The Buttercross was re-erected in 1995 by the Chippenham Civic Society with funding provided by a wide range of local individuals and organisations. It currently stands as the centre-piece of the pedestrianised area of the town centre, where a market is held each Friday and Saturday.[5]

The Yelde Hall is currently the site of the Tourist Information Centre in Chippenham. It is run jointly by Chippenham Town and North Wiltshire District Councils and is the largest Tourist Information Centre in North Wiltshire. The hall is one of very few remaining mediæval timber framed buildings in the town. It was originally divided up internally for use as a market hall. Both the hall and its meeting room upstairs were used by the burgess and bailiff for a variety of meetings and trials as well as being used for Council meetings. The space under the Council Chamber was used as the town gaol. The hall was also used in this time for fund raising events for the local church. After the Council and Burgess (now Mayor) moved to the Town Hall (High Street, Chippenham) in 1841 the hall had many different uses:

Bird's Marsh is a large woodland to the north of the town. It is home to many kinds of wildlife, and a popular place for walkers, due to its fairly large size and surrounding countryside. One entrance into Bird's Marsh can be found through a field close to the supermarket, just south of the roundabout on the A350 Malmesbury Road. There are also access points off Hill Corner Road (over fields) and Jacksom's Lane.

Although not actually a marsh these days, the ground can be very boggy off the well-marked paths, a feature which has protected this area from housing development.

In 2008, developers made a planning enquiry about building 800 homes around the Bird's Marsh area.[7][8]

There are believed to have been settlements in the Chippenham region since before Roman times. Remains of Romano-British settlements are visible in the wall behind the former Magistrates' Court|magistrates court and recent redevelopments of the town have shown up other evidence of the earliest settlements.[9]

In 853, Æthelswith, sister to Alfred the Great, married King Burgred of the Mercians in Chippenham. Alfred was then a boy of four and the wedding is believed to have been held on the site of St Andrew's church. According to Bishop Asser's Life of King Alfred Chippenham was, under Alfred's reign, a royal vill;[10] historians have also argued, from its proximity to the royal forests at Melksham and Barden, that it was probably a hunting lodge.[1] Alfred's daughter was also married in Chippenham.[11]

Chippenham was successfully besieged by Danish Vikings in 878, though Alfred escaped. Later that year Alfred decisively defeated the Danes at the Battle of Ethandun, whose forces then surrendered to Alfred at Chippenham.

In 1042 the Royal holding in Chippenham makes mention of a church.[3]

In Norman times the Royal properties were separated into the manors of Cheldon, Rowden and Lowden. Records show that the town expanded into Langstret (now the Causeway) from 1245 onwards and in 1406 onwards the town pushed into Le Newstret (now the New Road) area of town. Throughout this period Chippenham continued to have a thriving market in the town centre.

Chippenham was a borough electing two members to Parliament from 1295 onwards and Queen Mary I granted the town a Charter of Incorporation in 1554.

The parish of Chippenham Without encompasses the deserted mediæval village of Sheldon, devastated by plague; all that remains today is Sheldon Manor, Wiltshire's oldest inhabited manor house, dating from 1282.

The wool industry took off in the 16th century due, in part, to the river. The plague hit the town hard in 1611 and 1636. This, a recession in the woollen industry, and a drop in corn harvests in 1622 and 1623, caused massive hardship for the town's population. The trade in cloth faced further problems during the English Civil War due to a Royalist proclamation that prohibited the sale of cloth to the Parliamentarian controlled London.

In 1747 a bribery and corruption scandal (involving two members of parliament for Chippenham) led to the downfall of Sir Robert Walpole's government.

A spur off the Wilts & Berks Canal was built to Chippenham in 1798 with a wharf at the current site of the bus station (Timber Street) with the main commodity traded being coal. Pewsham Way now follows the line of the old canal. The Great Western Railway arrived in Chippenham in 1841 which in turn attracted many new businesses to Chippenham. The arrival of these businesses required new housing which led to the expansion of Chippenham into the land north of the railway line, which in turn led to the growth of further industries to support the building work.

The arrival of the railway promoted the growth of industrial agricultural businesses. In the middle of the 19th century Chippenham was a major centre for the dairy and pork produce; this led, later, to Nestle and Matteson's to have factories in the town centre. The railway also led to the growth of railway engineering works in Chippenham. The first of these was Roland Brotherhood in 1842. A variety of companies then took over part or all of the business on the site until in 1935 Westinghouse Brake and Signal Company Ltd took over the business site fully. [9] The signalling side of the business remains at the Chippenham site and is now owned by Invensys Rail Group; the brakes business was taken over by the German company Knorr-Bremse [13], and is based at a site in nearby Melksham.

On 13 February 1998, two unexploded bombs from Second World War were discovered in the field behind Hardens Mead during preparations for the building of Abbeyfield School. About 1,100 residents living in the east of Chippenham had to be evacuated for two nights to friends and relatives or emergency accommodation until the Army carried out a controlled explosion.[12] The Army initially attempted to defuse the larger device but it was decided that owing to the bomb's orientation in the ground it would be too dangerous.[14] 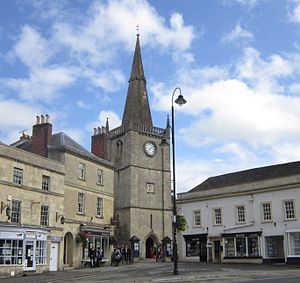 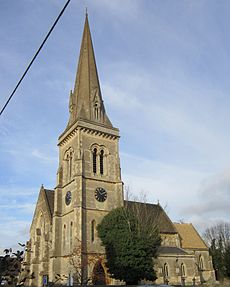 There was a Victorian era restoration of the interior of the church in 1875 - 1878 and another restoration in the 1990s. 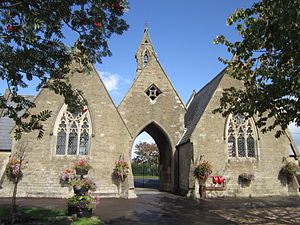 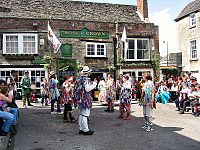 The Chippenham Folk Festival[15] takes place every year, usually over the Whitsuntide weekend.

The town holds an annual festival to mark the death of singer Eddie Cochran, who died on 17 April 1960 following a car crash in Chippenham.

From 25 October 1963 until 1999, the Town Museum was housed in Yelde Hall. The museum had, by this time, outgrown the site and moved to the former Magistrates' Court in the Market Place (opening on 23 March 2000). The museum charts the history of the town from Neolithic times until today. By 2005, the museum had attracted over 90,000 visitors.[6] 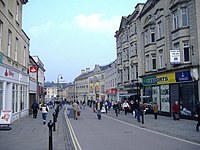 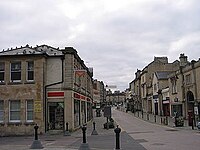 Historically a market town, Chippenham's economy has since changed to that of a commuter town with residents travelling to workplaces in Bath, Bristol, Swindon and London.

Several large businesses have been located in the region, with the biggest former employer being Westinghouse, now owned by Invensys, whose factory complex lies next to the railway station. The company undertakes railway signalling contracts for Network Rail, London Underground as well as railway operators is other parts of the world. Parts of the Westinghouse site are occupied by a range of companies.

A number of other industrial sites lie around the town, Bumpers Farm being the largest, home to many businesses of all sizes.

Of all the shops in the High Street and nearby alleys there are very few independent stores as franchises dominate, however some independent stores (Jewellers, Nail Bars, Florists, Bridal Gowns, Hairdressers) are located along The Causeway and the Upper Market Place.

Retail parks, such as the Hathaway Retail Park, are located on the edge of town containing larger superstores and fast-food outlets.

Chippenham is a market town, with street markets taking place most Fridays and Saturdays around Market Place and along the pedestrianised High Street. A Farmers' Market for the sale of fresh, locally produced foodstuffs is also held here once a fortnight.[16] The original Cattle Market, which closed in 2004, is now being redeveloped by Linden Homes Western Limited as one of the UK's largest eco-housing projects.

Surrounding the town are a number of stone-built villages, including Lacock (National Trust), Biddestone, Bremhill and Castle Combe.