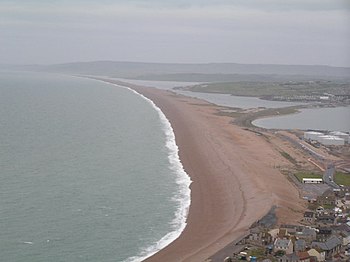 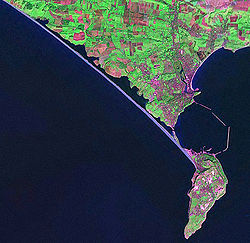 Satellite view of Chesil Beach and the Isle of Portland 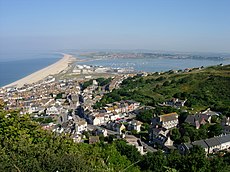 Chesil Beach viewed from the Isle of Portland 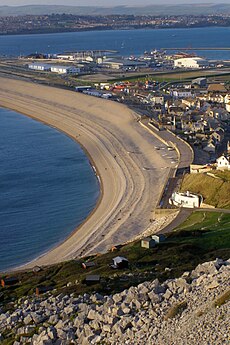 Chesil Cove at the Portland end of Chesil Beach

Chesil Beach, sometimes called Chesil Bank, in Dorset is a remarkable shingle bank 18 miles long on the south coast of Dorset stretching out in a smooth line from West Bay, Bridport to the Isle of Portland, trapping behind it a lagoon known as the Fleet. It is one of three major shingle structures in Britain.[1]

The name "Chesil Beach" is derived from the Old English ceosel or cisel, meaning "gravel" or "shingle".

At the eastern end of the beach at the village of Chiswell, against the cliffs of the Isle of Portland, the beach curves round sharply to form Chesil Cove. This part of the beach protects the low-lying village from flooding. Westwards the shingle forms a straight line along the coast, enclosing the Fleet, a shallow tidal lagoon.

The beach provides shelter from the prevailing winds and waves for the town of Weymouth and the village of Chiswell, which would otherwise probably not exist

Varying with the Bank's unbroken increase in height, to 48.2 feet, above mean high water, the size of the flint and chert shingle varies from pea-sized at the north-west end (by West Bay) to orange-sized at the south-east end (by Portland). It is said that smugglers who landed on the beach in the middle of the night could judge "exactly where they were" by the size of the shingle.[2]

The beach (SY635784) may be identified as a "tombolo", although research into the geomorphology of the area has revealed that it is better classified as a barrier beach which has "rolled" landwards, joining the mainland with the Isle of Portland, giving the appearance of a tombolo.[3] The shingle beach is 18 miles long, 660 feet wide and 50 feet high.

The origin of Chesil Beach has been argued over for some time.[4] Originally it was believed that beach material was from the Budleigh Salterton pebble beds to the west and later from Portland to the south east. The differences between the pebbles on the beach and nearby sources is now put down to the Flandrian isostatic sea level rise, so the feature could also be considered a barrier beach or bar, that happens to connect the mainland to an island rather than a 'true' tombolo. Normally, tombolos are created due to the effects of the island on waves (through refraction) and to sediment transport, which usually produces a beach perpendicular to the mainland rather than parallel to it.

The beach and the Fleet are part of the Jurassic Coast, a UNESCO World Heritage Site.

From West Bay to Cliff End the beach is piled up against the cliff. At Cliff End a hollow forms behind the beach and at Abbotsbury a stretch of saline (or brackish) water called the Fleet Lagoon begins. The Fleet is home to many wading birds and Abbotsbury Swannery, and fossils can be found in the sand and mud.

Because of the low population density of nearby areas and their proximity to the naval base on Portland, the beach and the Fleet were used for machine gun training and testing the bouncing bomb for Operation Chastise in the Second World War.

The Second World War defences constructed on and around Chesil Beach have been documented. A double row of anti-tank blocks divides the beach near Abbotsbury. The portion of the beach to the east of this division, in front of Fleet Lagoon, had no passive defences against a landing, whereas the beach to the west was protected with miles of Admiralty scaffolding with anti-tank ditches and minefields and flame fougasse installations a little further inland. There were many pillboxes.

Chesil Beach, the Fleet and the Isle of Portland, from the north-west over Abbotsbury