Chiswell (once known as Chesilton) is a small fishing village at the southern end of Chesil Beach, in Underhill, on the Isle of Portland in Dorset, and is the oldest settlement on the island. The small bay at Chiswell is called Chesil Cove. The promenade and sea wall which forms Chiswell's coastal defences are a prominent feature. The village itself is almost indistinguishable from Fortuneswell, the largest village on the island, as the two settlements are very close. However this distinction can be made: Chiswell occupies flat land close to sea level, whereas Fortuneswell's streets wind up and down the steep hills. At the entrance to the village is the 19th-century development of Victoria Square.

As with the rest of Portland's villages and settlements, Chiswell has been designated as a conservation area, as it is a place of special architectural and historic interest. Underhill, including Chiswell and other settlements, became designated in 1976 with boundary extensions in 1997 and 2000.[1][2] Today the village is maintained by the Chiswell Community Trust.[3]

Situated alongside the pebble bank of Chesil Cove, the village of Chiswell was established predominately as a fishing community.[4] Chiswell has its history dating back to Roman times, when it was known as "Coesl".[5] Many of the village's stone, thatched cottages were originally established on the shingle of Chesil Beach.[6]

Despite its vulnerability to sea storms and flooding, Chiswell continued to develop into a thriving community, and by the beginning of the 19th century it had become well established as a "burgeoning centre of trade and exchange".[7] Though the island's biggest settlement,[8] incidents of flooding were still part of village life there.[9]

One of the best-documented incidents of flooding was the Great Storm of 1824. Chiswell received the full force of the storm, which saw the death of thirty residents, the destruction of eighty houses, and the damage of many others.[10] The damage the storm inflicted upon Chiswell was so extensive that the village never made a full recovery. Traces of the effect the storm had on the village can be seen today.[11] Throughout the 20th century, Chiswell continued to lose its character, and saw further decline.[12] The first half of the 20th century had seen a number of calls for some form of protection from sea flooding. During 1942, the engineers Coode & Partners drew up plans for such measures, but lack of funding had once again stopped any such project from commencing.[13]

The construction of a sea wall finally commenced in 1958, and continued until 1965. The wall extended from the far end of Chesil Cove to the location of the village's Cove House Inn. The wall reduced the risk of flooding, and deterred further coastal erosion.[14] The promenade above the wall became a popular attraction.[15] Despite the sea wall, two major storms in December 1978 and February 1979 caused further devastation to Chiswell. The flooding led to further defence installations during the 1980s. The scheme commenced in 1983 and was completed in 1986.[16][17]

In January 1990 another storm hit Chesil Cove and the sea overwhelmed the defensive wall. Much damage was caused and Portland was cut off from the mainland.[18] During January-February 2014, violent storms across the south-west of England caused more flooding in the village, which received a lot of national and international attention.[19] Today the majority of the village is strictly residential.[20] 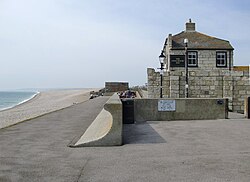 The Cove House Inn and part of the esplanade. 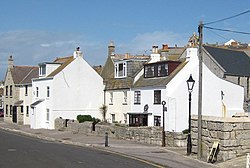 The village of Chiswell has various commercial businesses in place. The houses and shops in Chiswell have experienced many changes of ownership over the years.[21] Aside from The Cove House Inn and The Little Ship pubs, The Bluefish Cafe and Restaurant is also close to Chesil Beach and lies within Chiswell, serving fish dishes as a specialty.[22]

A church is also located in the area: The United Reformed Church. It was founded in 1825 and closed in 2009.[23] The Chiswell Walled Garden is found within the walls of an old house that remains in ruin. The garden was made during the period 2001 to 2006 by the Chiswell Community Trust, with funding from Countryside Agency under their Doorstep Green Initiative. It is maintained by volunteer members of the Trust and is open to the public.[24]

Chiswell has a wide array of architecture and buildings, a number of which are Listed.

At Clement's Lane is the Conjurer's Lodge, a late 18th-century or early 19th-century workshop. A chapel within the building was initially set up after some local Methodists were accused as being witchcraft believers. They worshiped in the upper floor of the lodge for ten years until they were welcomed back to the church.[38] In May 1993 the lodge became Grade II Listed.[39] Ranter's Lodge, and its enclosing wall, has been Grade II Listed since January 1987. It is also known as "The Dead House".[40]

The Cove House Inn has sat next to Chesil Beach and right at the sea front since the 18th century, and remains one of Portland's most popular pubs.[41] It became Grade II Listed in May 1993.[42] The Little Ship, and the Royal Victoria Hotel, both in Victoria Square, are Grade II Listed too.[43][44]