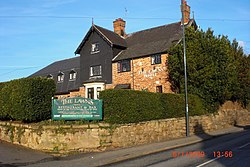 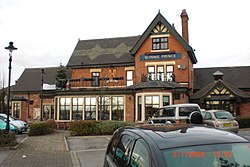 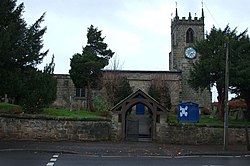 Chellaston is an ancient parish in Derbyshire that forms a suburb in the south of the city of Derby. It is on a natural hill, and has recently expanded due to several new housing estates.

An early mention of Chellaston is thought to be a reference to Ceolarde's hill. This is mentioned in a 1009 charter when nearby land was given to Morcar by Ethelred the Unready. Historically, Chellaston has been part of the Hundred of Repton and Gresley.[1]

Chellaston was a separate village and was worth three shillings when the king gave it to Henry de Ferrers in the 11th century.[2] It is mentioned as "Celerdestune" in the Domesday Book.[3]

Throughout the centuries, Chellaston grew slowly. By 1676, the village had grown to a population of around 140, and there were still only 42 houses in Chellaston in 1789.[3] There may have been up to two manor houses in Chellaston, but these residences were abandoned sometime around the 17th century. One of them is thought to have been located at the end of the present-day Manor Road.[3]

It is rumoured that Robin Hood was born at a manor house in Chellaston. This claim is mentioned in several directories and gazetteers published in the 19th century, but there is no evidence to substantiate this legend.[3] However, Philip Marc, the local sheriff at the time of the Robin Hood legend, had real associations with Chellaston.[4]

Chellaston was once one of the largest producers of mined alabaster in the United Kingdom, which was used to produce Nottingham Alabaster.[5] By the end of the 18th century, Chellaston was exporting its poor grades of alabaster as gypsum and it was transported via the local canals for markets in Derby and The Potteries. It was even used by Josiah Wedgwood for plaster moulds to shape his pottery.[6] The remains of Chellaston's pits can be found at the bottom of Pit Close Lane and Woodgate Drive, and the site is now popular with BMX bikers and teenagers.

Chellaston grew substantially between 1880 and 1950, with a number of areas being developed for housing. These developments included housing around Glenwood Road, Station Road, and north of Sutton Avenue.[7] After 1950, the village grew even more: houses were built in the Springfield Road and St Peter's Road areas, among others.[7] By the 1990s, extensive housing complexes had emerged, most notably on Sutton Avenue, Maple Drive, and Parkway.

As of 2009, Chellaston has become a large Derby suburb; much larger than the original village. Two distinct housing estates to the east and west of the centre have been built. The eastern estate can be found on Snelsmoor Lane, and the west estate sprawls in an arc from the Bonnie Prince public house on Swarkestone Road to the bottom of Sinfin Moor Lane and Baltimore Bridge.

Chellaston lies about five miles south of Derby city centre, and is the southernmost part of the city. It borders Shelton Lock to the north.

Chellaston has a Co-operative supermarket on the corner of High Street and Derby Road. The Post Office is located on Derby Road near Station Road, next to Chellaston Garage (a small car repair business) and a Cantonese takeaway – Ming's Court (which used to be a petrol station). A Tesco Express was housed on the site next to the garage until April 2011, when it moved to new premises in the former Red Lion public house.

Chellaston has six pubs, including the bars at the Lawns Hotel, Chellaston Bowls Club and the British Legion on High Street. The bowls club can be traced back to 1905.[8] The others are: the Corner Pin, the Rose and Crown, and The Bonnie Prince. The Red Lion pub on Derby Road closed in late 2007. Before being converted into a public house, The Bonnie Prince used to be a grand private residence named Home Lea, home to the Osbourne family in 1901.[9][10]

There is also a children's playground next to the Chellaston Community Centre, which is situated on Barley Croft, off High Street. In the late 2000s, a local public library was built between the community centre and the Co-operative supermarket.[11]

The 25-acre site of the former Chellaston Brickworks is now a designated Local Nature Reserve.[12] Chellaston has intermittently hosted an annual summer carnival complete with floats. Floats were contributed by local groups such as the Scouts and Guides, churches of all denominations, and Chellaston Junior School. The carnival usually took place on the recreation ground, next to the community centre on Barley Croft, but has not been held since the late 1990s.

No 4 Swarkestone Road probably originates in the 16th century but has been much altered since. White House Farm on the High Street is a Grade II farmhouse and stables dating from the early 18th century. Pear Tree Cottage at 49 Derby Road dates to 1799. Opposite the church at 84 High Street is the former village shop, which has been Grade II-listed as being relatively unchanged since the early 19th century.[13]

The main road through Chellaston is the A514 Derby Road, which becomes Swarkestone Road at the crossroads with High Street. Approximately 1,000 new homes have been built to the west of Chellaston, close to the route of the disused and in-filled Derby Canal.

Formerly, the suburb had its own railway station (at the bottom of Station Road), but little trace of the site exists today. The station's full name was Chellaston and Swarkestone. The main public transport link is the bus service, which journeys either side of Chellaston as far as Derby and Swadlincote.[14]

There are three churches in Chellaston: St. Peter's Church (Church of England) on St. Peter's Road, the Methodist Church on High Street and St. Ralph Sherwin Church Catholic on Swarkestone Road next to Chellaston School. St Peter's dates from the 15th century although it was largely rebuilt in 1842. The three churches have a signed an ecumenical covenant together, and hold a joint service every month.[20] There also used to be a Baptist church in Chellaston near Pear Tree Cottage on Derby Road.

AFC Chellaston (formally Chellaston Boys & Girls FC); an FA Charter Standard Community Football Club founded in 1992. The club is based at Snelsmoor Park in Chellaston. The club, run by volunteers, has approx. 30 teams, playing in the Derby and Burton junior football leagues. Players are aged from 3 right through to 18 and there approx. 300 registered with the club.

The following came from Chellaston: