Barrow upon Trent is a village and parish in southern Derbyshire, to the south of Derby, and between the River Trent (to the south) and the Trent and Mersey Canal (to the north). According to the 2001 census the parish had a population of 546,[1] increasing to 558 at the 2011 Census.[2] Nearby places are Sinfin, Ingleby, Arleston, and Swarkestone. 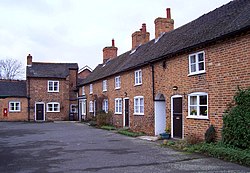 One of the earliest mentions of this place is in the Domesday book where it is listed amongst the lands given to Henry de Ferrers[3] by the King. The land included eight acres of ground space and there were four oxen. Some of the land was described as "waste" but the value was put at two shillings.

The parish council owns an attractive row of ten Grade-II-listed cottages, known as "The Row". These are rented to people with village connections.[1] It also owns "The Pinfold", a small walled area originally used for holding stray cattle.

The village is home to a Lafarge quarry.

Barrow-Upon-Trent was home to the writer Anne Mozley[4] and the artist George Turner (1841-1910) who moved here from Cromford. Turner went on to train his son, William Lakin Turner, along with other notable artists.

In the parish there are a number of facilities: village hall, public house, youth group, preschool playgroup (2 years and above), Sale and Davy's C of E Primary School, St Wilfrid's church and a children's play park as well as a larger park with both a full size and a smaller size football pitch. There is no shop or post office.

The main road, the A5132, has bypassed the village since 1969. There are bus services to Melbourne and Derby, but only on weekdays.