Charney Bassett is a village in north-western Berkshire, 4½ miles north of Wantage and 6 miles east of Faringdon. It lies within the broad Vale of White Horse, with the River Ock at its foot. Lyford lies just downstream.

About a mile north of the village, between Charney and Pusey is Cherbury Camp, an Iron Age earthwork. It looks like the nearby hill forts on the Berkshire Downs but is unusual in being built on more or less level ground, away from any hill. Cherbury means "fort beside the River Cearn". Cherbury is larger than Uffington Castle hill fort.

Charney Bassett has been settled since Anglo-Saxon era. The earliest known records of the locality's history record a grant of land to the Abbot of Abingdon Abbey in AD 811. The surrounding area was largely marshland and the meaning of Charney is "Cearn island". This Cearn was an alternative name for the River Ock, that runs close by and which supplies the mill stream. 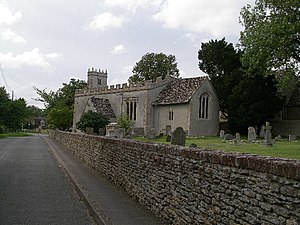 The parish church, St Peter's is a mediæval church. It has some 12th century parts and a turret containing two mediæval chiming bells, and is Grade I listed.

Along with the churches of Longworth, Hinton Waldrist, Lyford, Buckland, Pusey and Littleworth, it is part of the jpint Benefice of Cherbury with Gainfield.[1]

On the village green stands a mediæval stone pillar mounted upon three steps. This may have been a market cross where goods could be offered for sale at certain times of the year. A sundial was later added to the top and this would have been used as the village time-piece. After the First World War the centre step was replaced with a dressed stone memorial to the fallen, whose names are inscribed thereon.

Charney Manor is a Grade I listed building. It was built in the 13th century as a grange for Abingdon Abbey, which then owned extensive land around the village. It is now owned by the Religious Society of Friends (Quakers).

Charney Water Mill and its adjoining cottage are Grade II listed. The mill is owned by the council and let to the parish council. The machinery is mainly intact and the mill has been undergoing restoration by the Vale of White Horse Industrial Archaeology Group since about 1975.[2]