Buckland is a village in north-western Berkshire, four miles north-east of Faringdon. It is an estate village,[1] created to house those working at Buckland House.[2]

The River Thames forms the northern boundary of the parish, just over a mile north of the village.

The most notable buildings are the parish church of St Mary the Virgin and Buckland House.

The soil of Buckland is a rich, sandy loam with the subsoil consisting of Corallian Beds and Oxford Clay.[3]

The history of Buckland is inextricably linked with that of the manor of Buckland and its owners:

Buckland House is a large Georgian stately home and the manor house of Buckland. It is a masterpiece of Palladian architecture erected by John Wood, the Younger for Sir Robert Throckmorton in 1757.[5]

Buckland Manor House was the manor house of Buckland until Buckland House was built in 1757 and it was converted into stables.[3] However, in the mid-20th century, the building again became a private house. It was built late in the 16th century and is a two storey eastward facing rectangular block, refaced in Georgian Gothic Revival style.

Barcote Manor or Park is a Tudor Revival house built in 1876 for Lady Theodora Guest. She sold it to the millionaire, William West, Director of the Great Western Railway, in 1881. It later became a boarding school, the Barcote School of Coaching, and has now been converted into flats.[8] A previous building on the site was the home of the Holcott family from 1230 to 1586.[3]

Carswell House is a gabled building originally built by John Southby, both JP and MP for Berkshire, in the early 17th century. Major additions were added in the Victorian period. The Southbys lived on the site from 1584 to 1892.[3]

The parish church of Saint Mary the Virgin is largely a 12th-century building, with 13th century chancel, tower and transepts and some minor Victorian additions. The main north and south nave doors are unusual in having a matching pair of Norman arches.

In the chancel is a triangular locker containing the heart-burial (1575) of William Holcott of Barcote Manor. He was a staunch Protestant who only just avoided being burnt at the stake by Mary I ("Bloody Mary"). After the Reformation, he became a zealous lay preacher, often gracing the pulpit in his "velvet bonnet and damask gown...sometimes with a gold chain". There is a number of 14th century tomb recesses, an inscribed slab with a floriated cross to Dame Felice la Blonde and a number of monuments to the Yates of Buckland Manor, including the monumental brass|brass of John Yate (1578). The church also houses a 14th-century octagonal font, a late 12th century Crusader Chest, hatchments to the Throckmortons and bells dating back to 1636. The magnificent Barcote Chapel is famed for its decorative mosaic work (1890–92) to the memory of Clara Jane, wife of William West, of Barcote Manor.[3] 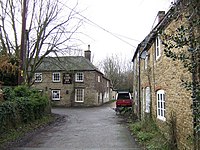 Various sources have been collated by the University of Portsmouth and others to give an insight into Buckland in the 19th and 20th centuries. The information quoted is for the civil parish of Buckland as defined at each time period.

The earliest published figure for the population of Buckland is from 1801 (although it is recorded in the 1851 census) at 727 people. The population steadily increased and by 1851, there are 987 people living in Buckland. From here is begins a steady decline and after a further 50 years in 1901, the Buckland population is down to 665 people. It varies a little over the next fifty years but by 1951 is down to 636 people. By 1971, 597 people are recorded in Buckland[14] compared to the 553 recorded in the 2001 census.

In 1774 Henry James Pye, Poet Laureate to George III, wrote the poem Faringdon Hill. Part of it refers to Buckland:

See Buckland here her lovely scenes display,
which rude erewhile in rich disorder lay
til Taste and Genius with corrective hand
spread Culture's nicest vesture o'er the land,
and called each latent beauty to the fight;
clothed the declining slopes with pendant wood,
and o'er the sedge grown meadows poured the floor.[4]