Carningli or Mynydd Carningli is a hill or small mountain in the Preseli Hills near the town of Newport in Pembrokeshire. It has both prehistoric and historic remains.

The hill is only 1,138 ft high, but it is close to the coast and dominates the surrounding countryside. It is easy to climb but has a rocky summit and a steep scree slope on its southern and eastern flanks. It is a biological SSSI.

The summit features a large and prominent archeological site. This hillfort, generally dated to the Iron Age and assumed to be from the first millennium BC. It covers an area of about 10 acres, and is about 440 yards x 160 yards in extent.

The lower slopes of Carningli are covered with traces of Bronze Age settlement (Pearson 2001) and so some features of the hill fort may be even older. Although not one of the largest fortified sites in Wales, it is certainly one of the most complex, incorporating a series of substantial stone embankments, natural rock cliffs and scree slopes which may have been used as natural defences. Inside and outside the embankments there are terraced enclosures, hut circles and rectangles. There are around 25 hut circles at the North East end of the site, and on the other side there are three enclosures separated by embankments. Beneath the scree slope on the eastern flank of the mountain there are two further massive defensive embankments. There are signs that some of the defensive embankments and walls had been intentionally demolished. The only plan is that of Hogg 1973 - it has been modified by Figgis, and again in recent research by Brian John.

There are records of intermittent occupation of the site by vagrants and other homeless people in the Age of the Saints (411–700), and as recently as the Middle Ages.[1] There has never been a comprehensive excavation of the hillfort.

As with other upland defended sites, the economy of the tribe which inhabited Carningli was probably a pastoral one. The site is incredibly exposed, and it is quite possible that it was only seasonally inhabited.

The site is referred to in the Cadw Guide to Ancient and Historic Wales (1992) by Sian Rees, and in NP Figgis's "Prehistoric Preseli" (2001). 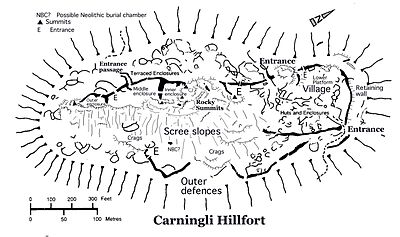 According to legend St Brynach (a local saint) used to climb to the summit to find serenity, to pray and to "commune with the angels" in the 5th century. In some old texts and maps the mountain is called Carn Yengly or Carnengli, which are probably corruptions of Carn Engylau. Strictly, this would be translated as "the rocky summit of the angels." However, this derivation of the name is not universally agreed.[2]

Brian John's "Angel Mountain Saga" of eight volumes, recounts the life of Mistress Martha Morgan of Plas Ingli. These books were published between 2001 and 2012. The mountain is the heroine's personal sanctuary.

There was once a little "mountain railway" on Carningli, carrying broken stone from a small quarry down to a crushing plant on the Cilgwyn Road. Some railway sleepers can still be found in the turf, but otherwise the only traces remaining are the two stone pillars that supported a cable drum — a cable was used to control the descent of the loaded wagons as they rolled downhill, and then to pull the empty ones back up again. This little industry was abandoned before 1930.