Carleton-in-Craven is a village in the Craven district of the West Riding of Yorkshire. It stands on the west side of the River Aire, at the foot of the hills rising above Airedale, just over a mile and a half south-west of Skipton. The village had a population of 1,118 at the 2011 Census.

The name of the village is a commonplace name nationally, from the Old English ceorla tun, meaning 'peasants' village'. The spelling of the village name with an 'e' is early, first found in a record, dated 1440, mentioning Robert Mosele, a husbandman of the village, who was accused by Robert Blakey of carrying away some of the latter's goods.[1] As late as 1908 though, the local council used the spelling 'Carlton', on the engraved stone plaque incorporated into the magnificent re-built stone bridge over the River Aire on the road to Skipton. 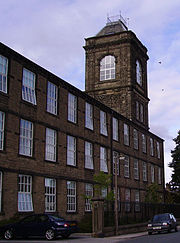 Carleton Mill dates to 1861,[2] when it was built for spinning cotton; the mill later housed a mail-order business throughout the 1930s. During the Second World War the Rover company used the building to produce aircraft parts. Shortly after the war, the mill returned to its original use as a textile factory and later produced carpets, eventually closing in November 1999.[3][4] In 2005 it was converted to luxury apartments by Novo Homes, with 51 apartments in the mill and 26 houses constructed within the grounds.[5]