Bampton, also called Bampton-in-the-Bush, is a settlement and parish in on the River Thames in Oxfordshire. It is situated about 4½ miles south-west of Witney. The civil parish includes the hamlet of Weald and in the 2011 census its population was 2,564.[1]

Bampton is variously referred to as both a town and a village. The Domesday Book recorded that it was a market town by 1086. It continued as such until the 1890s.[2] It has both a Town Hall and a Village Hall.

The core of Bampton is on gravel terraces formed of Summertown-Radley or Flood Plain Terrace deposits.[3]

The Bampton area has been settled since Iron Age and Roman times. The earliest settlement was probably somewhat to the east of the centre of Bampton today, the triangular space known as Market Square. Bampton was an important place in the Saxon and Middle Ages.[4]

United States troops were billeted in Bampton at various times during the Second World War.

Bampton is the setting for the fictional crime novels The Chronicles of Hugh de Singleton, set in about 1366, by Mel Starr.[5] 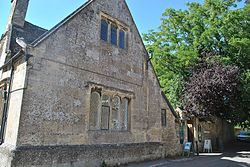 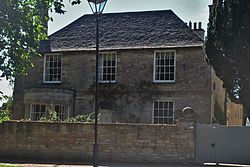 The Church of England parish church of Saint Mary the Virgin dates from the 12th century. It is on the site of a late Saxon Minster, the tower of which survives in the present church. It has a 13th-century spire, and a carved stone reredos of Christ and his Apostles from about 1400. 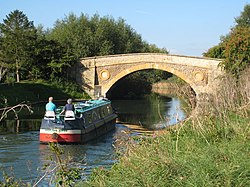 Tadpole Bridge carries the road between Bampton and Buckland, Berkshire

From 1861 until 1961 Brize Norton and Bampton railway station, two miles north of the village, served the area.

Buses serve Bampton on the route from Carterton to Witney. 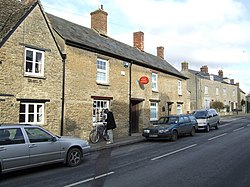 Three Bampton residents Arnold Woodley, Jack Horn and Reg Absolom formed the Bampton Pumpkin club in March 1969. Every October there is a Pumpkin Club weigh-in, where all contestants' pumpkins are weighed, with the winner being awarded a prize. The first ever winner of the club weigh-in was Joe Buckingham with a gourd weighing 51 lbs 8 oz. After the weigh-in the pumpkins, along with flowers, fruit and vegetables, are auctioned. The money raised is given to local senior citizens.

Bampton Youth Centre was founded in 1984 to provide facilities for children and teenagers. It is in the Victorian former primary school building in Church View.

Bampton's gardening club holds two flower shows each year. The Summer Show is held at the end of June or early July, and the Autumn Show is held in September. The first ever shows were held in October 1972.

The Society for the Protection of Bampton (SPB) is a society set up in 1993 to maintain or improve the quality of life for people living in Bampton. The society bought a field in Bampton for use by the village; the field used to be owned by Oxfordshire County Council. The society has around 450 members.

The Bampton Environmental Watch Group (BEWG) is a group set up in 1989, to look after the Bampton environment; it currently has around 100 members.

'Society for the Preservation of Ancient Junketing' (SPAJERS) organises a race (the Bampton Shirt Race) around the village on the late May Bank Holiday each year, celebrating the 14 pubs that used to be open. Runners, originally dressed in night-gowns in pairs, with one pushing another in a trolley, stopping at the houses that used to be pubs (and of course the current open pubs), and drinking a measure of beer before running to the next. The race now often features larger teams in fancy dress with a variety of wheeled vehicles. A children's race with soft drinks is also run.

The local magazine The Bampton Beam is distributed freely to all residences and businesses in Bampton. It contains information on events in the Bampton area.

Bampton is the home of Bampton Classical Opera which performs both in Bampton and elsewhere, including London. In Bampton the venue is the garden of the Deanery, a private house near St Mary's church. A curved yew hedge encloses the opera stage, providing excellent natural acoustics.

Bampton has a tradition of Morris dancing which may be 600 years old. Documentary and circumstantial evidence show that morris dancing in Bampton goes back at least to the 1790s. Morris dancing used to be performed in Bampton on Whit Monday but the date has recently changed to the late May Bank Holiday.[7]

Aunt Sally is a traditional throwing game, played predominantly in pubs in Oxfordshire. The Bampton & District Aunt Sally Association was formed in 1971. In the Bampton league, games are played on Thursday evenings between teams of 6 players (unlike other leagues in Oxfordshire who field teams of 8).[8]

Bampton Skatepark was built for the village's skateboarders and BMX riders.