Anguilla is a British overseas territory in the West Indies, one of the most northerly of the Leeward Islands in the Lesser Antilles. It consists of the main island of Anguilla itself, approximately 16 miles long by 3 miles wide wide at its widest point, together with a number of much smaller islands and cays with no permanent population. The island's capital is The Valley. The total land area of the territory is 35 square miles, with a population of approximately 13,500, by 2006 estimate.

The island lies directly north of Saint Martin, an island divided between the French and Dutch. Anguilla is separated from that island by the Anguilla Channel.

The soil of Anguilla is generally thin and poor, supporting only scrub vegetation.

Anguilla is noted for its spectacular and ecologically important coral reefs and beaches. Apart from the main island of Anguilla itself, the territory includes a number of other smaller islands and cays, mostly tiny and uninhabited. Some of these are:

Aerial view of the western Anguilla

Anguilla was first settled by Amerindian tribes who migrated from South America. The earliest Amerindian artefacts found on Anguilla have been dated to around 1300 BC, and remains of settlements date from 600 AD.[1] The date of European discovery is uncertain: some sources claim that Columbus sighted the island in 1493, while others state that the island was first discovered by the French in 1564 or 1565.[2] The name Anguilla derives from the word for "eel" in Spanish and indeed any of various Romance languages; the name was probably chosen because of the island's eel-like shape.

Anguilla was first colonised by English settlers from Saint Kitts, beginning in 1650.[3] The French temporarily took the island over in 1666 but under the Treaty of Breda in 1667 it was returned to English control. In this early colonial period Anguilla sometimes served as a place of refuge. A Major John Scott who visited in September of 1667 wrote of leaving the island "in good condition" and noted that in July 1668 "200 or 300 people fled thither in time of war."[4] Other early arrivals included Europeans from Antigua and Barbados. It is likely that some of these early Europeans brought enslaved Africans with them. Historians confirm that African slaves lived in the region in the early 17th century. For example, Africans from Senegal lived in St. Christopher (today St. Kitts) in 1626. By 1672 a slave depot existed on the island of Nevis, serving the Leeward Islands. While the time of African arrival in Anguilla is difficult to place precisely, archival evidence indicates a substantial African presence (at least 100) on the island by 1683.

During the early colonial period, Anguilla was administered by the British authorities through Antigua, but in 1824 it was placed under the administrative control of nearby Saint Kitts. In 1967, Britain granted Saint Kitts and Nevis full internal autonomy, and Anguilla was also incorporated into the new unified dependency, named Saint Christopher-Nevis-Anguilla, against the wishes of many Anguillians. This led to two rebellions in 1967 and 1969, headed by Ronald Webster, and a brief period as a self-declared independent republic. British authority was fully restored in July, 1971. In 1980 Anguilla was finally allowed to secede from Saint Kitts and Nevis and become a separate British colony (now termed a British overseas territory).

Anguilla's thin arid soil is largely unsuitable for agriculture, and the island has few land-based natural resources. Its main industries are tourism, offshore incorporation and management, offshore banking, and fishing. Many insurance and financial businesses are headquartered in Anguilla.

The economy of Anguilla is falling with the highest speed in the World as a result of the 2008- World crisis.

Before that the economy of Anguilla was expanding rapidly, especially the tourism sector which was driving major new developments in partnerships with multi-national companies.

Anguilla's currency is the East Caribbean dollar, though the US dollar is also widely accepted. The exchange rate is fixed to the US dollar at US$1=EC$2.68.

The economy, and especially the tourism sector, suffered a setback in late 1995 due to the effects of Hurricane Luis in September but recovered in 1996. Hotels were hit particularly hard during this time. Another economic setback occurred during the aftermath of Hurricane Lenny in 2000.[5]

The majority of residents (90.08%) are black, the descendants of slaves transported from Africa. Growing minorities include whites at 3.74% and people of mixed race at 4.65% (figures from 2001 census).

72% of the population is Anguillian by birth while 28% is non-Anguillian (2001 census). Of the non-Anguillian population, many are citizens of the United States, United Kingdom, St Kitts & Nevis, the Dominican Republic, Jamaica and Nigeria.

2006 and 2007 saw an influx of large numbers of Chinese, Indian, and Mexican workers, brought in as labour for major tourist developments due to the local population’s not being large enough to support the labour requirements. 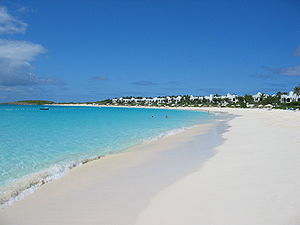 The beach at the Cap Juluca resort on Maundays Bay. 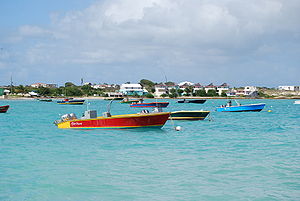 The Anguilla National Trust (ANT) was established in 1988 and opened its offices in 1993 charged with the responsibility of preserving the heritage of the island, including its cultural heritage. The Trust has programmes encouraging Anguillian writers and the preservation of the island's history.

The island's cultural history begins with the Taino Indians. Artefacts have been found around the island, telling of life before European settlers arrived.

As throughout the Caribbean, holidays are a cultural fixture. Anguilla's most important holidays are of historic as much as cultural importance – particularly the anniversary of the emancipation (previously August Monday in the Park), celebrated as the Summer Festival. British festivities, such as the Queen's birthday, are also celebrated.

According to the 2001 census Christianity is Anguilla's predominant religion. 29% of the population worship as Anglicans, while another 23.9% are Methodist. Other churches on the island include Seventh-day Adventist, Baptist and Roman Catholic. Between 1992 and 2001 the number of followers of the Pentecostal churches increased considerably.

There are at least 15 churches on the island, several of architectural interest.

Although a minority on the island, it is an important location to followers of Rastafarian religion as Anguilla is the birthplace of Robert Athlyi Rogers, author of “The Holy Piby”, a book which has had a strong influence on Rastafarian beliefs.

Boat racing has deep roots in Anguillian culture, and is the national sport. There are regular sailing regattas on national holidays, such as Carnival, which are contested by locally built and designed boats. These boats have names and have sponsors that print their logo on their sails.

As in many other former British colonies, cricket is also a popular sport. Anguilla is the home of Omari Banks, who played for the West Indies Cricket Team, while Cardigan Connor played first-class cricket for Hampshire County Cricket Club and was 'chef de mission' (team manager) for Anguilla's Commonwealth Games team in 2002.

Rugby union is represented in Anguilla by the Anguilla Eels RFC, who were formed in April 2006.[6] The Eels have been finalists in the St. Martin tournament in November 2006 and semi finalists in 2007, 2008, 2009 and Champions in 2010. The Eels were formed in 2006 by Scottish club national second row Martin Welsh, Club Sponsor and President of the AERFC Ms Jacquie Ruan, and Canadian standout Scrumhalf Mark Harris (Toronto Scottish RFC). The club was lucky enough to host the HMS Iron Duke in September 2008 which saw a very spirited game going to the visitors 18-13. The St Barts Barracudas have also been to Anguilla to play the Eels also prevailing 11 points to 6. 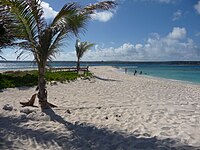