Bray, sometimes known as Bray-on-Thames, is a village in Berkshire, standing on the banks of the River Thames, just south-east of Maidenhead. It is most famed as the village in the satirical song The Vicar of Bray.

Though located on the very edge of Maidenhead, Bray is separate and still very much an idyllic British village. It won best 'Small Village' in the 2005 Britain in Bloom awards, while its cricket club is the oldest in the county, having been first established in 1798. Bray is a very affluent residential area, as well as being a place popular with tourists exploring the Thames.

In and around the village are many delightful walks and a number of well-known eating establishments.

The village has attracted an number of famous residents and, though a small place, it has several restaurants, of which two have three Michelin stars: The Fat Duck, which was judged the best restaurant in the world by Restaurant magazine in 2005, and the Waterside Inn, which ranked 19 in Restaurant's list. This is particularly significant as there are only four three-star restaurants in the United Kingdom; two in London and two in Bray.

There are also television and film studios found in the Bray area, including Bray Studios, which made the "Hammer Horror" films.

The riverside upstream of Bray Lock has been referred to as 'Millionaires' row' in the national press from the number of grand houses. The flooding risk of these houses has recently been decreased by the Jubilee River a large drainage channel on the Buckinghamshire bank landscaped to look in parts like a natural river running down to Eton, and its companion cut on the Berkshire side between Maidenhead and Windsor.

The ancient parish is coextensive with the hundred of Bray, and encompasses the southern parts of Maidenhead. Maidenhead however grew independently and surpassed its mother parish, becoming an independent civil parish in 1894. The smaller civil parish however, remains very large. As well as the main village, the parish contains a several villages and hamlets, often greens, which were originally scattered amongst the dense woodland of Windsor Forest that once covered the area. These include: Bray Wick, Holyport, Water Oakley, Oakley Green, Moneyrow Green, Stud Green, Foxley Green, Touchen End, Braywoodside, Hawthorn Hill and Fifield. 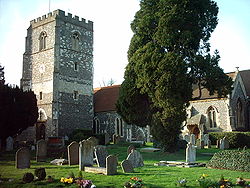 The parish church of St Michael was built in 1293, supposedly to replace an Anglo-Saxon church at Water Oakley. It has a number of sculptures which may have come from the earlier church, including a damaged Sheela na Gig. It is well known to brass rubbers for the superb memorial brass of 1378 to Sir John Foxley, the Constable of Southampton Castle, and his two wives.

A wild local legend has it that one of the local cottages has a tunnel which once led to the church and served as an escape route for clergymen.

The Jesus Hospital is a red-brick group of almhouses, founded in 1609 by William Goddard, whose full-size effigy stands over the entrance, to house thirty-four of the aged poor of Bray and six of the Worshipful Company of Fishmongers to which he belonged.

Monkey Island, an island in the Thames, is associated with the 3rd Duke of Marlborough, and still has two amusing structures that he built and furnished with paintings of monkeys. On the island today stands a hotel.

The Vicar of Bray

"The Vicar of Bray" is a traditional, satirical song from which we have the expression "Vicar of Bray" to refer to one whose principles change conveniently to accord with the prevailing politics. The most familiar version of the song recounts the vicar's flexible conformity over the half century, embracing whichever religious principles were favoured by the monarch of the day in order to retain his position, so:

That whatsoever King may reign,
I will be the Vicar of Bray, Sir!

Other versions have been heard covering the Caroligian and Commonwealth periods, or the Tudor reformations and reaction, all with the same theme. No one knows if a genuine Vicar of Bray was the original model but several individuals have been proposed as the one who could sing:

In good King Charles's golden days,
When Loyalty no harm meant;
A Zealous High-Church man I was,
And so I gain'd Preferment.

For in my Faith, and Loyalty,
I never once will faulter,
But George, my lawful king shall be -
Except the Times shou'd alter.