Not to be confused with Bilton-in-Ainsty

Bilton is a village which has become a suburb of Harrogate, in the West Riding of Yorkshire, standing to the north-east of Harrogate's town centre.

The village is on the south side of the dramatic Nidd Gorge through which flows the River Nidd. Across the gorge is Knaresborough, with which Bilton was once closely connected.

Bilton was first recorded (as Billeton) in the Domesday Book in 1086. The name is of Old English origin and means "Billa's farmstead".[1]

Bilton was historically in the parish of Knaresborough and formed a township with Harrogate,[2] until in 1866 the township of Bilton with Harrogate became a civil parish on its own.[3]

In 1848 the Leeds and Thirsk Railway was opened through Bilton, although no station was built there. The line crossed the River Nidd on the northern boundary of Bilton by a stone viaduct, the Nidd Viaduct which still boldly spans the gorge.

In 1908 a narrow gauge railway was constructed from the main line to carry coal to the gas works next to the Little Wonder roundabout. The line was closed in 1956, and with the tracks having been removed the only remains of the line are some walls and the tunnels that carried the trains.[4] A small museum was opened in the neighbouring New Park School, where the line used to come out above ground. Between 2007 and 2008 the school created a garden, known as "The Secret Railway Garden", to commemorate the line.[5][6]

The area of Bilton west of the railway line was developed in the 19th and 20th centuries. The parish church of St John, designed by George Gilbert Scott, was built between 1851 and 1857. It is now a Grade II* listed building.[7]

The area east of the railway has remained rural, with scattered houses now known as Old Bilton. The main railway line through Bilton was closed in 1969.[8] In 2013 it was reopened as a cycle way and bridleway known as the Nidderdale Greenway.[9]

Bilton Hall is a large former country house lying to the east of Old Bilton on a hill facing Knaresborough. Built on the site of a hunting lodge constructed on the orders of John O'Gaunt in 1380.[10] William Slingsby, who discovered the first spa well in Harrogate, once resided at the Hall. Bilton Hall became the seat of the Stockdale family from 1631, with three members of that family serving as Members of Parliament for Knaresborough. It later passed into institutional use and is now a care home.[11] 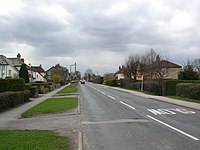 On the first May Bank Holiday each year the Bilton Gala takes place.[12] The first Gala was held in 1977 and the event, which is attended by local families, raises money for groups and organisations within the local community.

Bilton has five churches, four primary schools and its own library. There are a number of shops, including two convenience stores. The Library closed but has now re-opened on the site of Woodfield Primary School.

There is one public house, the Gardeners Arms, in Old Bilton. The Skipton (formerly the Dragon) on Skipton Road closed in February 2014[13] and The Oak Beck public house on Woodfield Road has been demolished to be replaced by houses.