Benbecula is an island of Inverness-shire in the Outer Hebrides, lying between North Uist and South Uist, along with Grimsay beside it. At low tide the four islands are joined together naturally, and a road runs across them all carried by a causeway.

The manner of the islands, that one might cross from one to the other on foot at the right tide if weather and the sea permit, has originated a traditional Hebridean valediction, to wish a departing guest "May there be a road".

In the 2001 census Benbecula had a usually resident population of 1,249.

The first written record of the name is as "Beanbeacla" in 1449.[1] Historically this name has been assumed to derive from Peighinn nam Fadhla meaning "pennyland of the fords", as the island is essentially flat.[2] Phonetically it is highly similar to the unstressed form of Beinn "mountain", a familiar place-name element if not appropriate to such a low-lying island.. Folk etymology or re-analysis may turned to the modern forms containing Beinn rather than Peighinn.

Other interpretations that have been suggested over the years are Beinn Bheag a' bhFaodhla, supposedly meaning the "little mountain of the ford" and Beinn a' Bhuachaille, meaning "the herdsman's mountain".[4]

The island is also known in Gaelic poetry as An t-Eilean Dorcha "the dark island". The well-known tune The Dark Island was written by accordianist Iain MacLachlan from Benbecula.

A man of Benbecula is a Badhlach. 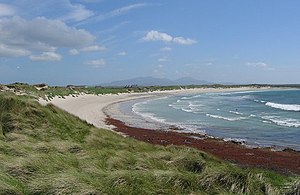 Beach on the west coast of Benbecula looking towards South Uist.

The island lies between the islands of North Uist and South Uist, to which it is connected by road causeways. Travel to any of the other main Hebridean islands, or to the mainland of Great Britain, must be done by air or sea.

Benbecula Airport on the island has daily flights to Glasgow, Stornoway and Barra. A direct service to Inverness was introduced in 2006 but discontinued in May 2007. There are no direct ferry services from Benbecula to the mainland, but a service operated by Caledonian MacBrayne from Lochboisdale on South Uist provides a five-hour crossing to Oban on the mainland, whilst another service from Lochmaddy on North Uist provides a two-hour crossing to Uig on the Inner Hebridean island of Skye, and thence to the mainland by way of the Skye Bridge. Ferry services from the islands of Berneray (linked by causeway to North Uist) and Eriskay (linked to South Uist) connect to the other Outer Hebridean islands of Harris and Barra respectively.

Other villages include Craigstrome, which lies on the eastern half of Benbecula. In contrast to the cultivated west coast of the island, the eastern half is a mixture of freshwater lochs, moorland, bog and deeply indenting sea lochs. Craigstrome is near Ruabhal, Benbecula's highest hill at 407 feet.

The township of Lionacleit is also an important one, housing the Uists' main secondary school, which also doubles as a community centre containing a swimming pool, cafeteria, sports facilities, a small museum and a library.[6] Next door to this is the Lionacleit campus of Lews Castle College. Lionacleit lies on the main weat coastal road, approximately 1 mile from its junction with the north-south spinal road at Creagorry.

The RAF radar station RRH Benbecula monitors the northern Atlantic, but is actually located on the west coast of North Uist. 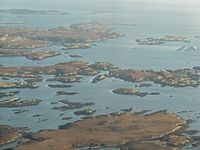 In addition to the Uists there are numerous islands off the north, east and south coasts. To the north of Balivanich is Baleshare and further west is Flodaigh, which is connected to Benbecula by a causeway, beyond which are Grimsay and Ronay.

The isles known as Eileanan Chearabhaigh(NF866476) in the south east have a total area of 247 acres spread over several islands, the largest of which is about 77 acres in extent.

Further south is the larger Wiay and west from there a profusion of skerries and small islands lie to the north of Bagh nam Faoileann. These include Fraoch-eilean, a second Grimsay, Fodragaigh, Eilean na Cille and Triallabreac.

Borve Castle is a ruined 14th century tower house, located at the south-west of the island. MacGibbon and Ross attributed the building of the tower to Amie MacRuari, the divorced wife of John of Islay, Lord of the Isles, and dated its construction to between 1344 and 1363.[7][8] It was occupied by the Macdonalds of Benbecula until the early 17th century.

In the early 15th century Hugh MacDonald, third son of Alexander, Earl of Ross was the proprietor of "lands in Uist, Benbecula and Garmoran" although his tenure was opposed by Clanranald of Garmoran.[9] By 1491 Clanranald were in possession of "nearly the whole of Uist and Benbecula".[10]

In 1549, Donald Monro, Dean of the Isles wrote of the "south part of Ywst" and went on:

and in the north syde of this there is ane parochin callit Buchagla, perteining to the said Clandonald. At the north end thereof the sea cuts the countrey againe, and that cutting of the sea is called Careynesse, and benorth this countrey is called Kenehnache of Ywst, that is in Englishe, the north head of Ywst.[11]

Benbecula has historically been a very strong Gaelic-speaking area. Both in the 1901 and 1921 census, all parishes were reported to be over 75% Gaelic speaking. By 1971, Benbecula and South Uist were classed as 50-74% Gaelic-speaking.[2]

After a protracted campaign local residents took control of parts of the island on 30 November 2006 in a community buy-out. The previous landowners, a sporting syndicate, sold the assets of the estate including Benbecula, South Uist and Eriskay, some 92,000 acres, for £4.5 million to a community-owned organisation known as Stòras Uibhist which was set up to purchase the land and to manage it in perpetuity.[12][13][14]