Eriskay is an island of Inverness-shire in the Outer Hebrides. It lies just south of South Uist, to which it is now connected by a causeway which was opened in 2001. The island is famed for its wild Eriskay ponies.

Barra lies to the south, and since the opening of the causeway, Eriskay has been the ferry terminal for sailing between South Uist and Barra; the vehicle ferry sails between Ceann a' Ghàraidh in Eriskay and Ardmore, Barra, a 40 minute journey.

The name of the island is from the Old Norse for "Eric's Isle" (Eiriksey). 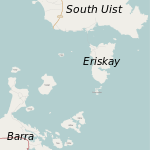 Although only a small island, Eriskay has many claims to fame that have made the island well-known far beyond the Hebrides. It is associated with the traditional Hebridean song, the Eriskay Love Lilt; with the Eriskay pony and the Eriskay jersey (made without any seams). It is the real Whisky Galore! island: it was just off Eriskay that the SS Politician ran aground in 1941 with its famous cargo of whisky, which was the basis of the film. On 2 August 1745 the small frigate le Du Teillay landed Prince Charles Edward Stuart here on Eriskay with his "seven men of Moidart"; the Young Pretender, "Bonnie Prince Charlie", thus began the 'Forty-Five" Jacobite Rising.

An important early documentary film, Eriskay: A Poem of Remote Lives, made by a German traveller, Werner Kissling, was set on the island.

There is a well-stocked shop in Eriskay, a community centre and the Politician Lounge Bar (named after the ship which serendipitously ran aground and famously provided the island with a generous supply of free whisky). The Roman Catholic church of St Michael's sits on a hill overlooking the main village on Eriskay. It celebrated its centenary in 2003, having been built by Father Allan MacDonald in 1903. The site of the old church is marked by a memorial garden with a statue of the Virgin Mary, overlooking the Sound of Barra.

Eriskay is traversed by a number of mountain paths and tracks, and has just a single motor road. The first stretch of that road was built in 1935, funded through proceeds from the first showing in London of the Werner Kissling film.

In 2009 the excellent natural harbour of Acarsaid Mhòr - a deep sea loch on the east coast, nearly dividing the island in two - the previous primitive quay facilities were greatly extended and modernised, and the vehicular access greatly improved. Some smaller fishing boats continue, at least if the tides and weather are favourable, to use the shelving bay at Haun (a name from the Norse for 'harbour', but scarcely with sufficient shelter to constitute a harbour in practice). Acarsaid Mhòr is also used by visiting yachts.

From Beinn Sciathan toward Barra

Following the establishment of the first Crofters Commission in the 1880s, the whole of the island - together with the small adjoining Stack Island - were incorporated into the crofting townships:

The souming (a word originating in the Norse era) for each full share gives the right to put, on the common grazings (the high ground of Beinn Sciathan and Beinn Stac), 10 sheep, 2 cows and 1 eriskay pony (all plus their 'followers' - young up to 1 year old). Most crofts have one full share, but many have a half share, and a few have 2 shares, and one croft has as many as 3 shares.

The crofts are small (typically 12 acres or less) and the land is rocky and exposed to harsh weather. These days, very few crofts are actively worked: there is little economic return in relation to the effort, and although there is a strong cultural attachment to the land, the demands and distractions of modern life leave little time for tending livestock and manual work. Much of the best grazing land - the machair of the north west of the island - is has been compromised by house-building and the increasing opposition to the free-range grazing of cattle and sheep during the winter. Now, the most actively worked crofts are in the township of Bun a' Mhuillin.

After a protracted campaign local residents took control of the island on 30 November 2006 in a community buy-out. The previous landowners, a sporting syndicate, sold the assets of the estate including Benbecula, South Uist and Eriskay for £4.5 million to a community-owned organisation known as Stòras Uibhist which was set up to purchase the land and to manage it in perpetuity.[1][2][3]

Eriskay, towards Easabhal on South Uist

Many Eriskay families have had to leave the island in recent years in search of work and some historic island families have few or no descendants left on the island. An example of these families is the MacInnes' who were a prominent island family at the time of the Kissling film but now number just four members of the extended family dwelling on the island, and active in crofting, shell-fishing, building work, as well contributing to the community.

Many of those who leave for the mainland are young as - in common with remoter rural areas generally - there are few work opportunities and limited access to further/higher education. To move away from home and find a way in the world is in most cases all to the good, but the real problem for Eriskay is the lack of opportunity and means to return to the islands whilst still young enough to make the greatest possible contribution to their native land.

Tourism has been slow to develop. As of 2010 there are no hotels, two or three bed and breakfast establishments, and until recently few self-catering cottages or houses. Since the completion in 2001 of the causeway to South Uist and the inauguration of the vehicle ferry to Barra, a number of properties have been professionally renovated or purpose-built as holiday accommodation. The machair and beaches from Coilleag a' Phrionnsa to Rudha Bàn are increasingly popular with visitors travelling with their motor-homes.

Sea bindweed, which is not native to the Hebrides grows on the island. Its presence there is said in local romance to stem from the arrival of the "Bonnie Prince", who accidentally dropped the seeds when he pulled a handkerchief from his pocket.[4]