Berneray is an island in the Sound of Harris, and one of the fifteen inhabited islands of the Outer Hebrides. Along with Harris to the north and North Uist and all the islands to the south, it is part of Inverness-shire.

The island is famed for its rich and colourful history which has attracted much tourism.

Berneray has more in common with its near neighbour, North Uist, than the mountainous Isle of Harris. It has an area of 2,496 acres and rises to a height of just 305 feet at its highest, at Beinn Shlèibhe (Moor Hill), while its second peak is 278 feet at Borve Hill.

There is strong evidence that points to Berneray's being inhabited since the Bronze Age, and possibly before. The island is scattered with ancient sacred sites, stone circles, signs of Norse habitation and historical buildings, some several centuries old. 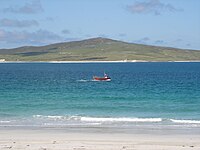 A fishing boat passes between Berneray's west beach and Pabbay

In common with most islands in the Outer Hebrides, the population declined during the 19th and 20th centuries. However, the past few years has seen a stabilisation. The island's population was 138 as recorded by the 2011 census a small rise since 2001 when there were 136 usual residents. During the same period island populations as a whole grew by 4% to 103,702.[3]

Most people on Berneray speak Scottish Gaelic, many as a first language.

Berneray is known as the birthplace of the giant Angus MacAskill and for its sandy beaches backed with sand dunes. The west beach, a three-mile stretch of wide, clean and often deserted sand, is widely acclaimed.[4] 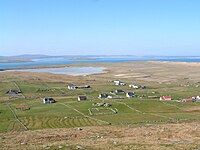 Borve and the machair 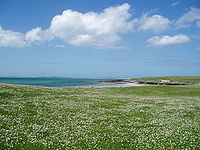 The Machair towards the West Beach

The main industries are fishing, crofting (small-scale individual farming), media/IT and tourism. Broadband internet provision became available in January 2006, giving an incentive to people wishing to relocate to Berneray and helping sustain the population and community.

A key feature of Berneray is its machair. The machair is a coastal plain made up of windblown shell sand. Traditional crofting practice, which involves summer agriculture using seaweed together with dung from winter grazing animals as natural fertiliser, has, over time, bound together and stabilised the land. The machair is ploughed in rotation, giving a patchwork of crops and fallow of different ages which supports a wide range of flowers. Berneray has a particularly fine machair, a result of careful husbandry by the island's crofters, helped by the absence of rabbits.

The youth hostel on Berneray

The youth hostel on Berneray is part of the Gatliff Hebridean Hostels Trust. The hostel consists of two restored black houses and is located at a magnificent setting overlooking the sound of Harris.

Possibly the greatest change in modern times occurred in 1999 when the causeway opened between Berneray and Otternish on North Uist. This has eased travelling on and off the island, improving employment prospects and accelerating the carriage of produce (notably, crabs and lobster). The causeway contains culverts that allow the easy passage of otters and fish from one side of the structure to the other. The causeway was formally opened by Prince Charles in April 1999.[5]

Berneray is served by regular local bus services from Lochmaddy on North Uist, many of which form part of the "Spine Route" from Eriskay. Most services are operated by Grenitote Travel, with funding from the council. Berneray is also linked to Harris by way of Leverburgh by the ferry operated by Caledonian MacBrayne.

The CalMac ferry MV Loch Bhrusda is named after the largest loch on Berneray. It can occasionally be seen relieving the usual ferry, MV Loch Portain.

Local crofting practices encourage a wide array of wildlife on Berneray. On early summer evenings you can sometimes hear snipe drumming, and even the rasp of a corncrake. Mute swans can be seen on Loch Brusda, and greylag geese are common. In the winter they are joined by barnacle geese, and a few Brent geese. Ravens and buzzards are often to be seen. Golden eagles and hen harriers are rarer sights, usually in the winter. Wading birds on the shore include redshanks, sanderlings, turnstones, oyster catchers, dunlin, curlews, whimbrels, ringed plovers and herons.

Further out, around the shores of Berneray, are mallards, eiders, red-breasted mergansers, and, more rarely, black-throated and great northern divers. Shags and cormorants fish in the seas around Berneray throughout the year, and in summer you can see gannets diving.

Common seals often congregate at low tide on the rocks in Bays Loch, and can often be seen from the parking area a little way beyond the Post Office or by taking a boat trip out into the bay. Grey seals, which are larger and can be distinguished by the long "Roman" noses, also haul out there occasionally, but are more common off the West Beach. Though the otters of Berneray are out during the day more often than on the mainland, they are still elusive, and it takes patience and luck to see one.

In the media and the arts

A television programme entitled Shepherds of Berneray was aired in 1981.

Berneray was in world news in 1987 when it was found that Charles, Prince of Wales had visited the island to live a normal Berneray life as a crofter.[6] He lived and worked with a crofter for one week and his visit spawned the later television documentary, A Prince Among Islands in 1991.

In 2007 a DVD called The Old New Year – a living tradition on the Isle of Berneray - was released about the island's Oidhche Challainn ("New Year's Eve", literally "Night of the Calends) celebration of New Year on 12 January in line the former Highland tradition of following the Julian Calendar.[7]

In 2009 it was reported that Berneray's west beach had been used to advertise Kae Bae beach in Trat Province, Thailand. A VisitScotland spokeswoman said that "I'm sure it is a compliment in disguise."[8]

The songwriter and poet Donald MacKillop (born 1926) is from Berneray.