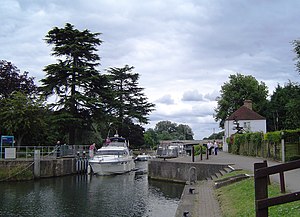 Bell Weir Lock with the M25 crossing beyond

Bell Weir Lock is a lock on the River Thames in Buckinghamshire, situated on the Surrey bank near Egham. Despite its situation on the Surrey bank, the county border deviates from the present course of the Thames to the south, placing it in Buckinghamshire. It is just upstream of the M25 Runnymede Bridge which carries the M25 and A30 road across the river. The lock was first built by the Thames Navigation Commission in 1817.

The weir is just a short distance upstream above the island. 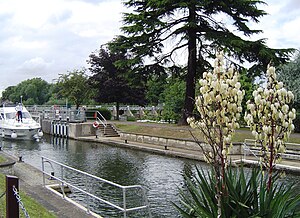 Bell Weir Lock with the weir behind

The first proposed location for a pound lock in 1811 was across the bend at the present recreation ground. The lock was built at its present site in the winter of 1817-1818. It was known as Egham Lock, but took its name from Charlie Bell, the first weir keeper and ferryman. The weir collapsed under weight of ice in 1827 and the lock collapsed in 1866. Lock and weir were rebuilt in 1867 but the lock had to be rebuilt in stone in 1877. A new weir was completed in 1904.[1]

The lock can be reached on foot from the A308 road and is behind the Runnymede Hotel.

The reach runs through Runnymede to Old Windsor. Immediately on the Buckinghamshire bank is a major water input and management facility at Hythe End that supplies the Staines Reservoirs and King George VI Reservoir. There are then riverside dwellings at Hythe End, particularly on the Island. This is followed by woods along the bank in which Magna Carta Island is tucked away followed by Pats Croft Eyot placed a little further out. Further on are more riverside dwellings at Wraysbury and on Friary Island. The Surrey bank has riverside houses and then opens out into a recreation area. Following that are the Runnymead meadows and the end of these are marked by the Edwin Lutyens gate houses. The "Bells of Ouseley" pub here is supposed to commemorate the bells of Osney Abbey which were brought downstream at the dissolution and disappeared into the mud at this point. There is a further built-up stretch at Old Windsor. There are no river crossings on this reach.

The reach is home to Wraysbury Skiff and Punting Club. Egham Regatta is held near Hythe End in June and Wraysbury and Old Windsor Regatta is held there in August. Pleasure boats from the recreation ground also ply the Thames here.

The Thames Path runs along the Surrey bank all the way to Old Windsor Lock.

Literature and the Media

In Three Men in a Boat, Jerome K. Jerome records:

"Harris and I began to think that Bell Weir lock must have been done away with ... It was half-past seven when we were through .... We had originally intended to go on to Magna Carta Island....But somehow we did not feel that we yearned for the picturesque nearly so much now as we had earlier in the day. A bit of water between a coal barge and a gasworks would have quite satisfied us for that night"'