New Holland is a small village and port on the Humber estuary in Lincolnshire. It had a population of just 955 at the 2001 census.

Formerly the embarkation point for the London & North Eastern Railway's ferry service to Victoria Pier, Kingston upon Hull. The ferry service was operational from 1820 to 1981, when the Humber Bridge opened. One of the former paddle steamers used on the route, the PS Tattershall Castle now serves as a London pub and restaurant, moored at the Embankment.

Another former ferry, the Lincoln Castle, served a similar purpose at Grimsby until 2006,[1] whilst the third of the trio of LNER-built steamers, PS Wingfield Castle returned home to Hartlepool, the place of its building where it is featured in the historic port museum.

The village today has no ferry, but by land it is served by New Holland railway station. 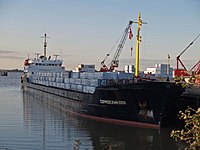 The port of New Holland is split into two parts. Firstly, the small tidal dock which was built in around 1848 with the coming of the railway and the jetty where New Holland Pier was formerly the terminal for the ferry crossing to Hull.

The port handles mostly bulk cargoes. The tidal dock is almost entirely used for the import of timber from Scandinavia, Russia and the Baltic states. Regular ports of origin for timber cargoes include Hamina (Finland), Kalmar (Sweden), St.Petersburg (Russia), Tallinn (Estonia) and Riga (Latvia) though many other ports feature. There are also occasional imports of steel which usually arrive from the near continent. The tidal dock generally only accommodates one vessel at a time.

The jetty, which has since the early 1980s been used for the import/export of bulk cargoes handles more ships than the tidal dock and is capable of accommodating larger vessels due to its location in the deeper river channel. Cargoes from the jetty originate and are destined to all parts of Scandinavia, Europe, the Black Sea and North Africa. The jetty has berths for three ships to be worked at any one time.