Barnard Castle Bridge is a stout, Tudor bridge carrying the A67 road over the River Tees into Barnard Castle. It thus joins Castle Barnard on the north bank in County Durham with Startforth on the south bank in the North Riding of Yorkshire. It is a Grade I listed structure.[1]

The bridge was apparently built or rebuilt in 1569 on the site of previous bridges now lost, though a stone on the parapet says '1596'. Since it was built in the days of Queen Elizabeth, the bridge has undergone significant alteration, in particular after the damage it suffered in the great flood of November 1771, after which it requires substantial repairs. At that stage new parapets were provided.

It is built of local stone and has weathered the ages, but modern traffic has weakened the bridge. and there is a weight restriction of 7.5 tonnes with traffic now controlled by lights. The bridge carries the A67 road from east to west. A new bridge and bypass has been suggested. 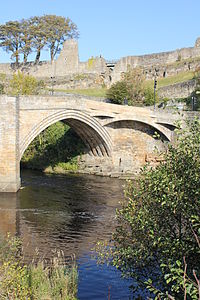 The bridge has two segmental-pointed triple-stepped arches, the eastern slightly taller, each on 5 square ribs It has triangular cutwaters, at the tops of which are pedestrian refuges. The 18th century parapets have slightly-arched coping, stepped out from wall faces above the arches.

On inner face of parapet in southern refuge are adjacent blocks with incised C.D. and brass-inset 'Y NR' and 'CD', marking border between the counties: 'Yorkshire North Riding' and 'County Durham'.