Startforth is a village in the North Riding of Yorkshire, on the south bank of the River Tees, which marks Yorkshire's border with County Durham. It stands facing Barnard Castle (in the latter county), to which it is joined by a bridge.

The village is within Teesdale, the long dale which the river cuts through the Pennines. The population of Starforth recorded at the 2011 Census was 1,361.

Startforth is the location of Deerbolt Prison, a male juvenile's prison and Young Offenders Institution. 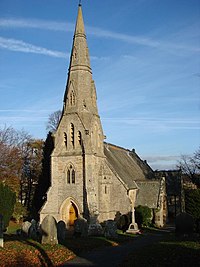 The parish church is Holy Trinity, within the Diocese of Leeds. The current church was built in 1863, replacing a mediæval church which had fallen into ruin. It is built of rock-faced stone and roofed with slate, and overall is built in a free interpretation of the style of the late thirteenth century.

Within the church there are reminders of the earlier church in the form of preserved memorial slabs: one to Thomas and Alice Blande c.1390 in the chancel and a worn 14th-century female effigy to north, and six thirteenth-century cross slabs in porch. Perhaps more interesting is a 17th-century slab with its inscription running in spiral.

A Roman road passed through the village, which linked the Roman forts of Bowes and Binchester, crossing the Tees at this point. The paved Roman ford is still visible in the bed of the river when the water is low.

The name 'Startforth' is first attested circa 1050, when it appears as Stretford. It is listed in the Domesday Book of 1086 as Stradford. The name means 'street-ford', and refers to the paved ford by which the Roman road crosses through the River Tees.[1]