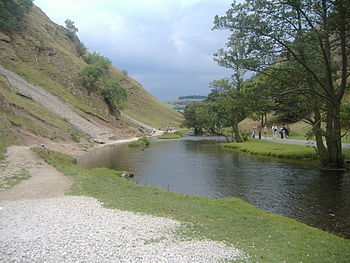 The Dove in Dovedale

The River Dove is the principal river of the south-western Peak District, and for much of its course it marks the boundary between Derbyshire to the east and Staffordshire to the west. The river is some 45 miles in length.

The Dove rises on Axe Edge Moor near Buxton at Dove Head (SK031684), a spring nowadays usually dry, and flows generally south to its meeting with the River Trent at Newton Solney.

The river meanders past Longnor and Hartington and cuts through a set of stunning limestone gorges, Beresford Dale, Wolfscote Dale, Milldale and Dovedale.[1]

The river is a famous trout stream. Charles Cotton's Fishing House, which was the inspiration for Izaak Walton's The Compleat Angler,[2] stands in the woods by the river near Hartington.

The river's name is now usually pronounced to rhyme with "love", but its original pronunciation rhymed with "rove", and this pronunciation is still used by some residents of the lower reaches of the river. 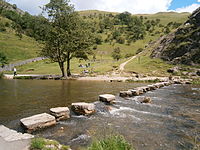 The stepping stones over the Dove in Dovedale

From Hartington to the meeting with the River Manifold at Ilam, the river flows through a series of scenic limestone valleys, known collectively as Dovedale. Dovedale is also particularly used for the name of that section between the stepping stones under Thorpe Cloud and Milldale. The Dovedale gorge is considered so scenic that it attracts a million visitors a year.[3] Good riverside paths make the whole route accessible to walkers.

Much of the dale is in the ownership of the National Trust, and part of their South Peak Estate. Dovedale itself was acquired in 1934, with successive properties being added until 1938, and Wolfscote Dale in 1948. Dovedale was declared a National Nature Reserve in 2006.

Dovedale's attractions include rock pillars such as Ilam Rock,[4] Viator's Bridge, and the limestone features Lovers' Leap and Reynard's Cave.[5]

Once the river leaves Dovedale it combines with the Manifold and enters a wider valley near Thorpe. The valley increases in size as the river continues south to reach Mapleton and then Mayfield, where it is crossed by the mediæval Hanging Bridge. At this point it is joined by the Bentley Brook, and then nearby at Church Mayfield, by the Henmore Brook.

The Dove now flows in a south-westerly direction, passing Norbury and Ellastone, where it turns south until it reaches Rocester. To the south of the village, at Combridge it is joined by its largest tributary the River Churnet. As it reaches the ancient Dove Bridge, it is joined by the River Tean, the river now meandering through a wide valley which turns east as it passes between Doveridge and Uttoxeter; the only town along its length.

Beyond this point riverside communities, such as Marchington, Sudbury and Scropton, tend to be located at the edge of the valley; although the village of Hatton encroaches across the valley floor, where it is linked by a bridge to Tutbury whose Castle overlooks the crossing. The river continues east passing the villages of Marston, Rolleston and Egginton, where it is joined by its last tributary, the Hilton Brook. The river is divided at this point, with some flow passing through the mill fleam at Clay Mills, the two arms rejoin downstream of the A38 road bridge.

The Dove discharges its waters into the River Trent a little further south, at Newton Solney.