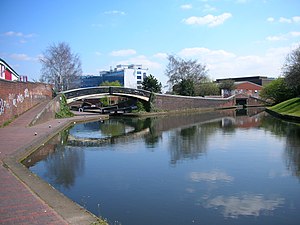 The Aston flight of locks to Salford Junction is to the left, and the Digbeth Branch to the right

Aston Junction is the name of the canal junction where the Digbeth Branch Canal terminates and meets the Birmingham and Fazeley Canal in Birmingham 6, Warwickshire. It is named after the area of Aston in which it is located.

The Birmingham and Fazeley Canal was authorised by an Act of Parliament in 1784, once the company had negotiated an agreement with the Oxford Canal, the Coventry Canal and the Trent and Mersey Canal to ensure that the links between the existing end of the Coventry Canal at Atherstone and the Trent and Mersey at Fradley Junction, and from the end of the Oxford Canal to the River Thames at Oxford would be built. The Atherstone to Fradley link would connect with the end of the Birmingham and Fazeley at Fazeley Junction. The company wanted to ensure that the canal would be part of a larger network, once completed, that would carry trade to London. The canal was completed from Farmers Bridge Junction, in the heart of Birmingham, to Fazeley in 1789, and the connecting links were completed in the following year.[1]

The junction was increasingly congested, as it was the main link between the Birmingham Canal network and the Warwick and Birmingham Canal route to London. Travel in any direction from the junction involved a flight of locks, and options to bypass the Farmers Bridge locks had been under consideration since 1793. On 14 February 1844, the congestion was significantly reduced by the simultaneous opening of the Tame Valley Canal, which bypassed the Birmingham Canal Navigations main line, and an extension of the Warwick and Birmingham Canal from Bordesley Junction to Salford Junction, enabling boats to avoid ascending through the eleven locks of the Aston flight and then descending through the six locks of the Ashted flight on the Digbeth Branch. Instead, the Garrison flight on the new line had just five locks.[4][5]

From the junction, the Birmingham and Fazeley Canal heads to the south-west and ascends through the 13 Farmers Bridge locks, rising 81 ft to reach Farmers Bridge Junction, a mile and a quarter away. To the north-east, it descends through the eleven locks of the Aston flight, to reach Salford junction, 1¾ miles away, where it is joined by the Tame Valley Canal and the Grand Union Canal. The Digbeth Branch heads south-east, and is just under a mile long. Typhoo Basin is also known as Digbeth Basin or Bordesley Basin.[4][6]

Aston Junction is notable in having two bridges serving the same lock; an iron Horseley bridge at the top and a brick bridge at the bottom.