Arisaig is a village in south-western Inverness-shire, standing on the west coast of the county. It is also the name of the surrounding natural district; a peninsula adjoining or forming an extension of South Morar.

The word Arisaig means "the safe place" in the Scottish Gaelic language.

On 20 September 1746 Bonnie Prince Charlie left Scotland for France from a place near the village following the failure of the Jacobite rising of 1745. The site of his departure is marked by the Prince's Cairn at Loch nan Uamh to the east of Arisaig. In 1770 the Gaelic poet Alasdair Mac Mhaighstir Alasdair died in Arisaig and was buried in the village's Roman Catholic cemetery.

Emigrants from this area founded Arisaig, Nova Scotia, Canada, in 1785.

During the Second World War the area was taken over by the Special Operations Executive to train agents for missions in Occupied Europe. Arisaig House, along with many others, was used as a training school.[1] The Land, Sea and Islands Centre[2] in the village has a display on the connection between the SOE and Arisaig.[3]

Tourism is the main industry in the Arisaig area due to the spectacular scenery and great beaches. A fictionalized Ardnish peninsula and Arisaig provide the setting for most of the "Ian and Sovra" series of children's novels by Elinor Lyon. 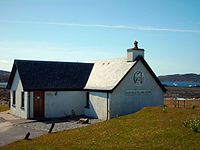 The Land, Sea and Island Centre

Arisaig is a rugged peninsula on Inverness-shire's west coast, between Morar, and Loch Morar, to the northeast, and the Sound of Arisaig to the south, and the open sea to the west. Arisaig village is at the western end of the peninsula in a sheltered bay, Loch nan Ceall. The westernmost headland of Arisaig is Rubh' Arisaig.

Arisaig lies on the A830, which leads to Mallaig to the north and Fort William to the east. The route, which is also known as the Road to the Isles, has been upgraded from a single to a double-track carriageway. Work was completed in 2008.