Aran Fawddwy is a mountain in Merionethshire which, standing at 2,969 feet, is Merionethshire's county top. Its eastern slope is marked with a high cliff; part of a chain of crags stretching north to south for several miles either side of Aran Fawddwy.

Aran Fawddwy, is only 30 feet short of 3,000 feet. It is the highest peak in the Aran mountain range and indeed the highest mountain in Great Britain south of Snowdon. The other two prominent summits in the Aran range are Glasgwm and Esgeiriau Gwynion.[1]

A predominant south-west to north-east ridge stretches between Dolgellau and Bala, a ridge that continues westwards as Cadair Idris, and of this, Aran Fawddwy is the principal summit.

Nearby peaks and villages

The name Aran Fawddwy means "Mawddwy Peak", a name shared with the nearest large villages; Dinas Mawddwy to the south and Llanymawddwy to the south-east, both on the course of the River Dovey. The nearest sizeable villages otherwise are Llanuwchllyn on the shores of Bala Lake to the north, and Rhydymain to the west.

Source of the Dovey 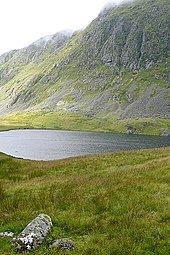 On the eastern slopes of Aran Fawddwy, beneath the crag, is the small lake named Creiglyn Dyfi, which is the source of the River Dovey. The Dovey, from these slopes, runs east as the Llaethnant over waterfalls until it creates a broader river valley at Pennant and heads south as the Dovey.

Aran Fawddwy is best ascended from Cywarch in the south.[3] Although a longer ridge climb is possible from the Bala side.