Cadair Idris or Cader Idris is a long mountain in Merionethshire. It lies at the southern end of the Snowdonia National Park. The mountain is one of the most popular of the challenging mountains in Wales for walkers and hikers,[1] and its shape and beauty are richly evocative of the wild landscape over which it presides.

Cadair Idris is not a single peaked mountain but a long fell with several tops along its ridge. Geologically, it is composed largely of Ordovician igneous rocks, with classic glacial erosion features such as cwms, moraines, striated rocks, and roches moutonnées; a fine variety on which to feast the eyes and the feet even out of the scientific approach.

The name "Cadair Idris" means "Chair of Idris". Several theories suggest an origin: the best known is that it refers to a giant of Welsh mythology who was said to have used Llyn Cau as an enormous armchair to gaze at the stars.[2]

An alternative theory is that a 7th-century Prince of Meirionnydd, Idris ap Gwyddno (or Gweiddno) won a battle against the Irish on the mountain.[2] Cadr is the Welsh word for stronghold which sounds similar to the Welsh word for chair cadair. Cad is also a prefix that relates to battle. Cadr Idris may have been the stronghold of Idris ap Gwyddno.[3]

The entire mountain bears name of Cadair Idris but its various tops have individual names. The highest summit is known as Penygadair, meaning "top of the chair".

The spelling Cader Idris is also found in both Welsh and English, though modern, standardised Welsh spelling prefers Cadair Idris. 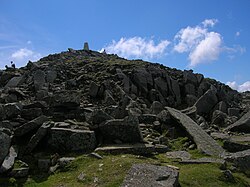 There are three main trails that lead to the top of Cadair Idris. The summit, Pengadair, is covered in scree and is marked by a trig point. There is also a low-standing stone shelter with a roof.

This route, which begins in the north from either Dolgellau or the Mawddach estuary, is the easiest but the longest of the main trails. Its length from the mountain's base is 3 miles with a 2,000-foot climb.

This is the most direct way to the summit as the trail leads straight up the northern face. The 2¼-mile ascent involves a climb up a 1,000-foot cliff-scree face. However this part of the Fox's Path has been heavily eroded in recent years making the descent even more dangerous than it ever was.

This route starts on the southern side of the mountain near the glacial Tal-y-llyn Lake. Hikers using this ascent climb past Llyn Cau and along the rim of Craig Cau (rockwall) to Penygadair. Its length is 2¾ miles and involves two climbs of some 1,000 feet.

The Northern face of Cadair Idris, viewed from Garth Gell) 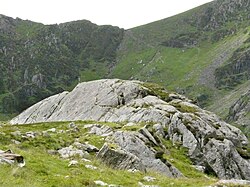 A roche moutonnée near Llyn Cau

The crater-like shape of Llyn Cau has given rise to the occasional mistaken claim that Cadair Idris is an extinct volcano. This theory was discounted as early as 1872, when Charles Kingsley commented in his book Town Geology :[4]

The natural bowl-shaped depression was formed by a cirque glacier during the last ice age when snow and ice accumulated in the corries due to avalanches on higher slopes. In these depressions, snow persisted through summer months, and becomes glacial ice. The cirque was surrounded on three sides by steep cliffs. The highest cliff was the headwall. The fourth side was the "lip" from which the glacier flowed away from the cirque. Over thousands of years ice flowed out through the bowl's opening carving the chair of Cadair Idris.

As the glacier eroded the lip down to the bedrock, there are several tear-drop shaped hills above the edge of Lyn Cau. These geologically-important rocky outcrops are called roche moutonnée ("sheep-like rock") and were formed from the abrasive action of the ice.

Much of the area around Cadair Idris was designated a National Nature Reserve in 1957, and is home to arctic-alpine plants such as purple saxifrage and dwarf willow .[5] 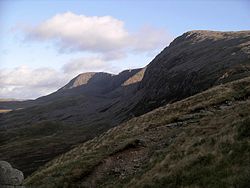 Looking at Penygadair (right) from the Pony Path

Numerous legends attach to Cadair Idris. Some nearby lakes are supposed to be bottomless, and anyone who sleeps on its slopes alone, will supposedly awaken either a madman or a poet. This tradition (of sleeping on the summit of the Mountain) apparently stems from bardic traditions, where bards would sleep on the mountain in hope of inspiration.[6]

The mountain's name refers to the mythological giant Idris (Idris Gawr) who was said to have been skilled in poetry, astronomy and philosophy.[6] The name has sometimes been mistranslated by some popular authors as Arthur's Seat, in reference to King Arthur (and to the hill of the same name in Edinburgh), an idea used by author Susan Cooper in her book The Grey King. However, this is a modern invention and there is no etymological or traditional connection between Idris and Arthur.

In Welsh mythology, Cadair Idris is also said to be one of the hunting grounds of Gwyn ap Nudd and his Cŵn Annwn. The howling of these huge dogs foretold death to anyone who heard them, the pack sweeping up that person's soul and herding it into Annwn, the underworld.