Appley Bridge is an affluent village in Lancashire, located off Junction 27 of the M6 motorway, nestled in the Douglas Valley alongside the Leeds and Liverpool Canal.

"Apple lea" (on the River Douglas), from (boscus de) Appelae, Appeleie, Appeleye, found in thirteenth century Chartulary of Cockersand Abbey; - also "Appley Moor"; within the township of Wrightington in the ancient parish of Eccleston.[1]

Once a busy industrial village with a paint and linoleum works, several quarries, and clay pits for the Wigan brick company, today the village still has several factories including a weighbridge manufacturer and a caravan factory. Today it is not as busy, its main purpose being providing housing for the many commuters who work along the M6 corridor. 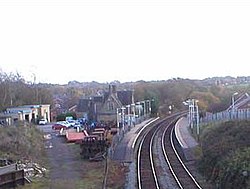 Appley Bridge has two churches, (Methodist and Church of England), and is in the Deanery of Chorley, Diocese of Blackburn.

Appley Bridge railway station, opened in 1855 by the Lancashire & Yorkshire Railway, is situated on the Southport to Manchester line. The village contains a few convenience shops, a football ground, several country pubs, and a post office. Appley converges into the village of Shevington. Vale[2] In Shevington Vale (which is distinct from nearby Shevington), there is a range of amenities including a SPAR convenience store, a Chinese takeaway, a hairdressing salon, and a pharmacy. There is also a small children's play area and football pitch opposite the Shevington Vale primary school. The Golden Days garden centre is just outside the main village on Back Lane, near the M6 Motorway junction. A waste paper recycling yard is also present on Appley Lane North offering free disposal of cardboard and paper as well as other services.

There are many open spaces in Appley Bridge where the local population play football, cricket, and rugby, etc. The organized football team is called Appley Bridge FC and plays matches on the football pitch on Appley Lane South facing the old local pub called The Bridge Inn, near the Leeds and Liverpool Canal. Appley Bridge FC which is a Football Association Charter club has many junior teams from the under age 8 up to the under age 16. This is complemented by senior teams and a successful over-35 team. The Senior team enjoys good support and the junior teams have at various age groups been very successful over the past seasons.

An unreliable 'popular history' story asserts that in the time of the war between the Roundheads and the Cavaliers, Oliver Cromwell ordered that monks should be driven out of their monasteries, killed, and their monasteries razed. One canny monk fled from his monastery and took refuge in a large cottage in Appley Bridge. Cromwell's Roundheads eventually discovered him in a cubby-hole halfway up the house's chimney, and tried to drive him out. They lit a blaze in the fireplace, forcing the monk out then killing him. The monk's discoloured skull has remained on the living room mantelpiece of the house.

Some inhabitants of Appley Bridge claim that throughout the history of the house, many residents have tried to get rid of the skull, and all have experienced disastrous results after doing so. According to the story, one threw it into the River Douglas at the bottom of Appley Lane North. Shortly after, the skull returned to the house and the offending resident drowned in the river. Another tried to get it as far away from the house as possible, and shortly after, the skull returned once again. The house's inhabitant fell down the stairs and severely injured himself. Others have tried many ways to banish the skull, and all have met with misfortune or fatality—sickness, the death of a loved one, bad luck ... the list goes on. The house's current residents have, unsurprisingly, never tried to remove the skull.

However, the story given about the origins of the name Skull House seems to be, at the least, confused, and probably apocryphal. The story about the monk and 'Oliver' Cromwell, although colourful, is based on a major confusion between Oliver Cromwell and Thomas Cromwell (no relation), the man who was responsible for the Dissolution of the Monasteries under Henry VIII. No monasteries remained in England at the time of the Civil War, and had not for more than a hundred years.

In 1986, the occupant at the time knew of no story connecting the skull to a monk, and claimed its identity was unknown.[4]

At around 8.45 on Tuesday evening of 13 October 1914, the inhabitants of Appley Bridge (indeed Lancashire and Cheshire too) were treated to a sudden and spectacular illumination of the night sky, caused by a meteorite that was found in a farmer's field in the village the following day. Found just 18 inches below the surface of the field, with the appearance of burnt iron, the small rock weighed almost 33 lb. An article in the "Scientific News" (No. 2588, 30 October 1914) stated, "a small fragment which had been detached from the larger mass was put on view in a shop-window at Appley Bridge." In September 2014 a book about the meteorite, by local author Russell Parry, was published.

On 22 August 1987, parts of Appley Bridge were affected by severe flooding - worst affected was the Millbank estate, off Mill Lane.

During heavy rain, the entrance to the culvert that carries Calico Brook beneath the estate became blocked by debris (leaves, branches etc.) and overtopped into the estate, causing extensive flooding to most of the properties. Most residents spent the next few months - up to December '87 - in caravans parked on their front gardens, whilst repairs were carried out. The properties required extensive repair: re-plastering, new woodwork (doors, window frames etc.), with only the higher houses at the entrance to the estate being unaffected.