Llwydcoed is a small village to north of the Cynon Valley in Glamorgan, near the town of Aberdare.

The village initially developed in the Tregibbon area, where in 1801 workers' housing was built by Thomas ap Shencin ap Gibbon of Fforchaman Farm. Other early housing was built at Miner's Row, Founder's Row and Scales Houses. The names of these streets betray their early origins; the Scale family were among the founders of the works and remained partners until 1846. 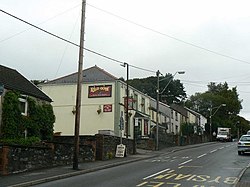 In the second half of the 19th century a new period of growth was instigated by the development of the coal industry in the area. Matthew Wayne Esq. of the Gadlys Ironworks opened the Dyllas Colliery in 1840 and in 1849 Ysguborwen Colliery was sunk by Samuel Thomas and Thomas Joseph. Among the houses built in this period were those at Moriah Place, Horeb Terrace and Grey's Place. Exhibition Row was built in 1851 and was named Exhibition Row in honour of the Great Exhibition held at the Crystal Palace that year.

The Aberdare Ironworks were established at Llwydcoed in the early nineteenth century and in 1823 were taken over by Rowland Fothergill. Ownership later passed to his nephew, Richard.[1]

Eight public houses were open in Llwydcoed at this time. They were The Earl Grey, Fox and Hounds, Red Cow, Corner House, The Mason's, Miner's Arms, the Dynevor Arms and the Croes Bychan. At that time stop tap was midnight and a local essayist recounts the boisterous nature of the revelries.

"It is said that more beer was lost (wasted) when the furnaces, coal mines and iron-ore undertakings were being worked, especially at the start of the month, and on pay Saturday Night, than is being drunk now." (Unknown Author. 'A Glance at the History of Llwydcoed' Translated by D Williams and D L Davies.)

The Vale of Neath Railway mainline from Neath to Merthyr Tydfil arrived in 1853, opening Llwydcoed railway station in the same year. Taken over on grouping by the Great Western Railway in 1923, the line remained open until closure under the British Railways Beeching Axe in 1963.

Llwydcoed War Memorial is an obelisk-type war memorial located within the local park. It was unveiled in 1921.