Uttoxeter is a small market town in Staffordshire, in the east of the county and away from any of the clumps of towns which have grown up on the main transport routes. Uttoxeter lies close to the River Dove, which here forms the border with Derbyshire and is approximately midway between Ashbourne, Derbyshire, Burton-on-Trent, Stoke-on-Trent and Stafford, with many miles of countryside between.

The famous Uttoxeter Racecourse is here.

Uttoxeter's name has had 79 spellings since it was mentioned in the Domesday Book as "Wotocheshede": a suggestion is that it comes from the Old English Wuttuceshæddre meaning "Wuttuc's homestead on the heath". Some historians point to pre-Roman settlement here and Bronze Age axes have been discovered in the town (now in display in the Potteries Museum in Stoke-on-Trent). It is possible that Uttoxeter had some form of Roman activity due to its strategic position on the River Dove and closeness to the large garrison forts at Rocester between 69 and 400 AD, and recently discovered fort at Stramshall, though little collaborating archaeology has been found.

Perhaps the most famous event to have occurred in Uttoxeter is the penance of Samuel Johnson. Johnson's father ran a bookstall on Uttoxeter market, and young Samuel once refused to help out on the stall. When Johnson was older, he stood in the rain (without a hat) as a penance for his failure to assist his father. This event is commemorated with the Johnson Memorial, which stands in the Market Place, in the town centre and there is also an area of town called Johnson Road, which commemorates him.

Mary Howitt, the Quaker writer of the poem "The Spider and the Fly", lived in Uttoxeter for a long period of her life. The town influenced some of her poems and novels, as well as fuelling her love of natural history, which also featured in her books. Howitt Crescent, a residential road in the town, was named after her. Recently, three of her poems were displayed in the town's bus shelters by the Uttoxeter Arts Festival Committee (now defunct).

Bunting’s brewery occupied a large area of the centre of the town since the Victorian era. It stopped producing beer in the 1930s after being bought by Bass Brewery of Burton upon Trent. The last remains of the brewery were demolished in the 1960s to make way for the Maltings shopping precinct and car park. The brewery clock was recently re-furbished and installed on the town hall.

In 1945, Joseph Cyril Bamford founded J C Bamford Excavators Limited in Uttoxeter, now known as J C Bamford and best known as ‘JCB’. The firm, based in the nearby village of Rocester, is the world's third-largest construction equipment manufacturer.[3] The firm's first vehicle was a tipping trailer made from war-surplus materials, which J. C. Bamford built in a rented lock-up garage in Uttoxeter. The Bamford family had previously started Bamfords, later Bamford International Farm Machinery which was a large employer in the town from the end of the 19th century through to the early 1980s when it gradually went into decline before closing in 1986.

In 2008 Uttoxeter celebrated its 700-year anniversary of the awarding of a Market charter (1308), which underpins the market provision on Saturdays and Wednesdays in particular, and other festival markets. The 1308 charter followed a more general Royal Charter granted to the town's burgesses in 1252.

One of the main employers in Uttoxeter is the global construction, demolition and agricultural equipment company J C Bamford. The firm is headquartered in Rocester, with another factory just outside Uttoxeter and one in Cheadle. Fox's Biscuits (previously Elkes and Adams) has a factory in Uttoxeter. Elkes were the creators of the famous malted milk biscuit.

The town's proximity to the Alton Towers Theme Park and Resort and the Peak District National Park means tourism is an important part of the local economy. Uttoxeter Racecourse, home to the Midlands Grand National, also brings a lot of visitors to the town, as do the town centre's shops and markets.

Agriculture is still important to the local economy. The town is set in rich dairy farming country. Uttoxeter previously housed a large dairy and was historically a major trader in butter and cheese. The farming cooperative Dairy Farmers of Britain had a large dairy in the nearby village of Fole, but this closed in 2008.[4] The next year the firm went into administration.[4] A new cattle market is due to be built in the town, after the old one was demolished in 2004.[5] 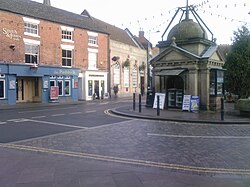 Dovefields Retail Park was first created in 1998 with the opening of a supermarket on the edge of the town. The retail park was further expanded in 2002 with the creation of seven large retail outlets. In 2005, work commenced on a new entertainment development. It is home to a bowling alley, a cinema, a children's crèche and a fitness centre as well as business units.[7]

The old Cattle Market, which closed in November 2005, was demolished to make way for a retail and housing development. There have been significant delays to the scheme, and public consultations and planning applications were still being carried out in 2012.[8] A replacement cattle market has been granted planning permission elsewhere in the town, but after several years no development has taken place.[5]

The existing town hall is currently under evaluation to ascertain if it can fulfil a wider range of functions.[9] A building inspection has reported some serious structural problems with the current state of the building.[10]

The old JCB site in the centre of Uttoxeter is currently lying vacant and is awaiting redevelopment, after the firm moved operations to one of its sites on the edge of town. It has lodged plans to build hundreds of homes, a park, a retail development, health complex and petrol station on the old Pinfold Street site.[11]

The parish church is St Mary the Virgin on Church Street in the town. The present structure dates from 1877 but parts of the building date from the 15th century.

There is also another Church of England church in The Heath area of the town which is known locally as The Heath Church. Both churches lie in the parish of Uttoxeter and the Diocese of Lichfield. 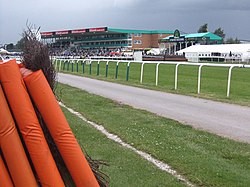 Uttoxeter Racecourse is one of Uttoxeter's most famous landmarks and is a short walk from the town centre. Bramshall Road Park is the town's recreational ground and offers tennis courts, skate ramps, a basketball court, a football pitch, a bowling green and two children's play areas, as well as floral arrangements and the small Picknall Brook nature reserve.

Redfern's Cottage:Museum of Uttoxeter Life is on Carter Street and is run by a group of volunteers. The restored timber-framed building houses local history displays.

The town's refurbished Market Place contains the town's main war memorial, as well as the Millennium Monument and the Dr. Johnson Memorial. The Wednesday and Saturday Markets are held weekly in the Market Place. The Spook Market is run every Friday. There's also a monthly Farmers' Market.[12]

Three miles northwest of Uttoxeter are the remains of Croxden Abbey, founded in 1176 by Bertram de Verdun for monks of the Cistercian Order.

Smallwood Manor, just over a mile outside the town and built in 1886, was formerly a country house and is now home to Smallwood Manor Preparatory School. The National Trust's Museum of Childhood is located at nearby Sudbury Hall.

The Wednesday and Saturday Markets are held weekly in the town's refurbished Market Place. Since 2007, Uttoxeter's new Market Place has held a Farmers' Market, run by the local branch of the National Farmers Union.[12]

Uttoxeter Civic Society was re-established in 2004 to act as a civic watchdog and to protect and promote the history and heritage of Uttoxeter.

Each year, Uttoxeter Lions run a beer festival in June, 'Lark in the Park' at Bramshall Road Park on August bank holiday, Bonfire and Fireworks Night in November and an annual Christmas fair and market known as 'Cracker Night'.

Uttoxeter Choral Society [13] was founded in 1881 and is one of the oldest choral societies in the United Kingdom. They have a continuous record of making music which is matched by very few other societies.

The Uttoxeter May Festival, a traditional folk music and dance event, takes place in early May every year.[14]

The Acoustic Festival of Britain is held here.

Uttoxeter Racecourse, which is home to the Midlands Grand National, is one of Uttoxeter's most famous landmarks and is a short walk from the town centre.

Uttoxeter obtained minor fame as the setting of a recurring comedy sketch by comedians Stephen Fry and Hugh Laurie in their BBC television series A Bit of Fry and Laurie, playing two obnoxious business entrepreneurs (who run various endeavours throughout the series, with rhetoric ramped up like top-flight international enterprises but always in Uttoxeter).

Oldfields Hall Middle School was featured in the film A Room for Romeo Brass, written and directed by Shane Meadows and Paul Fraser, two Uxonians who have risen to fame.

The town also featured in a critically praised short story entitled "The Long, Long Road to Uttoxeter" by journalist and TV presenter Rod Liddle in his book Too Beautiful for You.

Top Gear presenter and journalist Jeremy Clarkson has previously written that his favourite car journey of all time was in an Aston Martin from Newcastle upon Tyne to Uttoxeter Racecourse.