It is a well-known saying in the Isle of Man that on a clear day six kingdoms can be seen from the top: England, Ireland, Scotland, Wales, the Kingdom of Mann and the Kingdom of Heaven.[1] 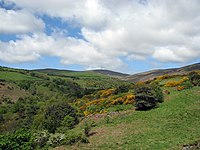